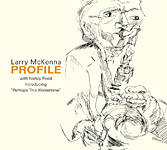 Tenor saxophonist Larry McKenna could well deserve a place among giants like Lester Young, Stan Getz, and Zoot Sims as a lyrical player whose artistry, precision, and interpretive capacities almost always exceed expectation. As Philadelphia DJ Bob Perkins states, in his liner notes to McKenna's Profile, "With Larry, the quality goes in before the McKenna name goes on."

A highly sought after and experienced musician—touring with Woody Herman and accompanying vocalists including Rosemary Clooney, Tony Bennett, Ray Run No Star Band, and Frank Sinatra—McKenna has settled into a quiet life performing mainly in the Philadelphia area. The city is blessed to have a gentleman of his capability bringing his cohorts to new levels of perfection. When McKenna shows up with a group at any given club date in Philadelphia, he appears reserved, still, and almost self-effacing. When it comes time to play, however, it is as if the Pied Piper has arisen from the dead. His playing is hauntingly beautiful and his mastery of the jazz idiom is peerless.

Fittingly for a man of modesty, McKenna has only released a handful of albums, but they're always memorable. It Might As Well Be Spring (Dreambox Media, 2001), an album of romantic ballad standards, delivers a bouquet of magical phrases which the saxophonist seems to gather up like fragrant roses. Profile consists of more diverse tunes, some fast, some slow, some original, some standard fare; a sampling of McKenna's broad range. Profile's centerpiece is "Perhaps This Wintertime," a song he co-wrote with lyricist Melissa Gilstrap that's destined to become a jazz standard. It's beautifully sung by Nancy Reed—a vocalist who, with her husband and cohort Spencer Reed, lives in the Pocono Mountains and often appears at the legendary Deerhead Inn there. McKenna, of course, provides Reed with a soulful accompaniment and choruses to sweeten the brew. (Gilstrap also deserves credit for the album's covers graphics, including a memorable sketch of McKenna appearing a bit like a wizened owl.)

McKenna mixes ballads with tracks like the bebop-informed originals "You Know It's Me" and "Is It Over My Head?"—the latter an answer to the question, "How Deep is the Ocean?," from which McKenna borrowed the chord progression in a nod to the style of Charlie Parker. "You'd Be So Nice to Come Home To" and "Out of Nowhere" further emphasize the bebop style. Not surprisingly, McKenna's finessed execution of rapid runs is virtually flawless.

A further highlight of this fascinating and listenable album is pianist Tom Lawton. Another incomparable international-level musician who plays locally for the most part, Lawton exceeds even his usual self on this recording, surely inspired by McKenna's emphasis on the evocative aesthetics of which jazz interpretations are capable at their very best.

You Know It's Me; Tres Palabras; You'd be So Nice to Come Home To; Perhaps this Wintertime; Is it Over My Head?; I'll Close My Eyes; I Love You; Dream Dancing; Out of Nowhere; Two for the Road.