PRISM Quartet with Joe Lovano at the Painted Bride 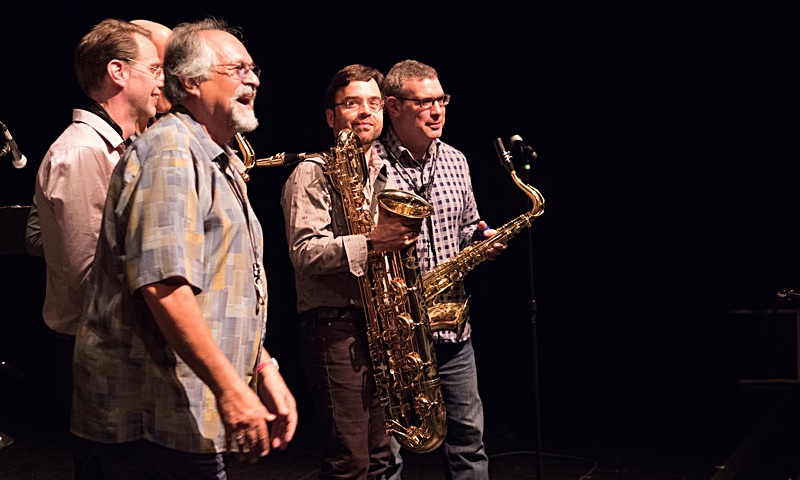 An optical prism breaks down white light into the distinct colors of the spectrum. For the PRISM Quartet, this analogy applies in two ways 1) the expression of the music in the four registers of the saxophones: soprano, alto, tenor, and baritone; and 2) the use of a classical music format for a variety of genres: classical, modern, jazz, and, for want of a better word, experimental. Although the saxophone nowadays is usually associated with jazz and marching bands, the instrument was invented by Adolph Sax in 1840 to fill a gap between brass and reed instruments in symphony orchestras and other ensembles. After more than a century where the saxophone was considered a specialty instrument and mostly relegated to peripheral uses, the PRISM Quartet was founded in 1984 at the University of Michigan, as a way of fulfilling Sax's intention of equal status with the other wind instruments. When you hear this group of classically trained and well-disciplined musicians, the first thing you notice is the European classical qualities of polished sound, careful intonation, and metronomic rhythmic precision. The sound is marvelous. If Mozart had access to a saxophone quartet, the chances are that he would have written many pieces for it. The showcase level of fine artistry is stunning to hear, especially when we are used to hearing saxophones wail, grunt, stutter, shout, and bend the sound. Adolf Sax lives!

In the last couple of years, PRISM initiated a series of ventures called "Heritage/Evolution" in which they cooperate with prominent jazz saxophonists in a crossover or third stream approach where jazz and classical meet. For example their 2 CD recording, Heritage/Evolution, Volume 1 (Innova Recordings, 2015) features compositions and performances from jazz saxophone icons Steve Lehman, Rudresh Mahanthappa, Miguel Zenon, Dave Liebman, Greg Osby. and former PRISM member Tim Ries. It's quite a heady mix: a unique style of playing jazz encountering an equally unique ensemble. The question is what happens when music and musicians with vastly different dedications and experience come together? Are you going to get surprisingly harmonious interaction, explosive chain reaction, or something else?

This concert at the Painted Bride Art Center gave the audience an opportunity to hear how one legendary jazz saxophonist, Joe Lovano, encountered this very tightly disciplined "classical" ensemble. The quartet provided an opportunity to hear them on their own, and then brought in Lovano, at first as an added saxophonist, and then as a full- blown composer and improviser, who in this context played drums and gongs, as well as, in turn, all four saxophones.

The quartet began with a contemporary composition that had echoes of Mozart and other classicists from the pantheon: "Night Music," by Emma O'Halloran, who exploited the gorgeous sound and pin-point precision of the group. It was stunning to hear the sheer beauty of saxophones played in the classical European manner. A piece by an advanced composition student, Reiny Rolock, took the music to the next level, with a deconstructionist but still 12-tonal approach. Here, the feeling prevailed of "made in America," with a general impression of a state fair or carnival reminiscent of some of Charles Ives' work.

Next, Lovano came on stage for a performance of just the first short movement, "Following the Sound," of his original composition, "Super Sonix." He blended in very well with the quartet, and they found many ways to integrate his improvisations into the ensemble.

For this reviewer, the highlight of the evening, however, was tenor saxophonist Matthew Levy's "Forbidden Drive." Here was a composition perfectly suited and orchestrated for the PRISM group. Levy explained that the "Forbidden Drive" is a trail near Philadelphia's Wissahickon Creek, in a secluded area of woods, where many locals relax on their days off. The music captured in its tone colors the various moods one would experience in a secluded place that is close to nature but surrounded by a city. The quartet shone in its performance of this coherent and moving music, which had echoes of another Philadelphia composer, Jennifer Higdon. The effect of the music was spellbinding and exquisitely showed how much could be expressed by the saxophones when they are played by such masters.

After the intermission, the real cyclotronic collision of the jazz and classical modalities began to take place, first at a low velocity with composer Robert Carl's "Duke Meets Mort," the latter referring to classical composer Morton Feldman in an imaginary musical encounter with Duke Ellington. Here, you heard, within a modern classical framework, echoes of the Duke, especially "Sophisticated Lady," but you began to wonder, where is the jazz? The feeling was like jazz being housed like a dinosaur in the Museum of Natural History, and this is where the difficulty of merging genres began to appear.

The conundrum blasted off into outer space with Joe Lovano's seven movement piece, "Super Sonix." First let me say that this is a remarkably kaleidoscopic work, rich with musical allusions, both jazz and classical, extraordinary sound combinations, and ample opportunities for everyone to improvise. One could ignore the distraction of Lovano moving about the stage, picking up various saxophones, going over to the gongs, and then sitting himself at a full drum set to knock out rhythms that were a cross between Gene Krupa and Kenny Clarke. The real excitement was when he played saxophone with the quartet, churning out breath-taking improvisations that built to a crescendo of co- improvised Coltrane-like ascents. This was the high-energy particle collision you were waiting for, the CERN Large Hadron Collider revealing the Higgs Boson, bursts of sound that told you that matter was being converted into massive amounts of energy.

But—and this is the crux of the matter—my sense was that the jazz idiom was still housed in a museum-like structure, that it was referred to in the past tense rather than experienced in the moment. (It is not that the music was largely composed. Gershwin's Rhapsody in Blue and Charles Mingus' Epitaph are examples of through-composed music that is highly structured in the classical European way. But they are infused with the special ingredient that we call jazz.) Jazz is spontaneous, personal, flowing in the now. Somehow, with all the brilliance, complexity, and sophistication of this performance, it didn't quite make it into "the zone." The lack of that intangible called "swing" may have had something to do with it. I should add that this is not a criticism of Lovano or the PRISM Quartet. As Don Byron once said, "God doesn't care if it's jazz or not." It's just a matter of the mind set that the listener brings to a concert. More and more today, music should be heard in its own terms, not necessarily as a specific genre.