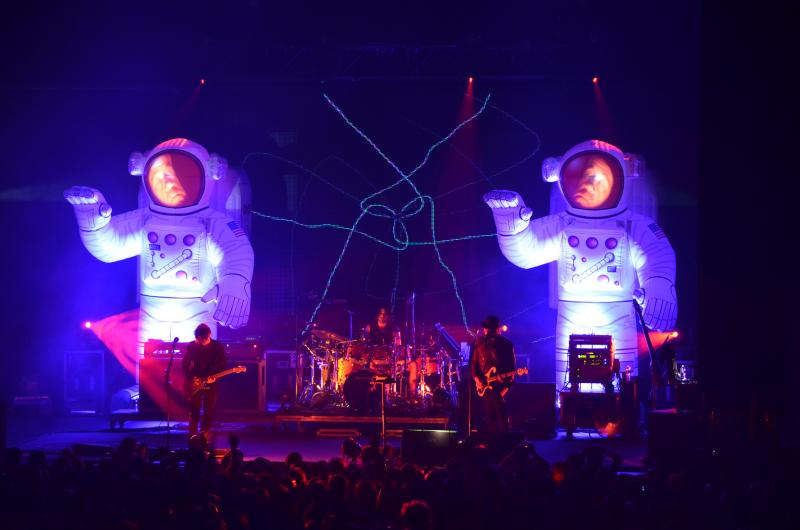 By MIKE PERCIACCANTE
October 23, 2011
Sign in to view read count
Primus
Roseland Ballroom
New York, New York
September 30, 2011
Alternative radio staple Primus brought their bass-heavy avant-rock to New York City's Roseland Ballroom in the form of their Green Naugahyde Tour. With the crowd chanting "Primus Sucks!"—it's a term of endearment, not the epitaph that many would think— bassist Les Claypool, drummer Jay Lane and guitarist Larry LaLonde appeared on stage just after 8:30 pm. The audience, already amped up, worked itself into a frenzy as the band chugged through two sets separated by a number of Popeye cartoons, plus two encores. Taking a page from some of the other alternative tours to hit New York in the past year (most notably Gorillaz), Primus' set-up featured a huge, three-story central LED video screen which projected cartoon images and graphics throughout the show, flanked on each side of the stage by a 30 ft. tall spaceman. With the rear projection images as well as the synchronized laser light show, at most times the band appeared in a quasi-silhouette.
During the first set, the trio heard the "Primus Sucks!" chant a number of times as they dove right in with a jamband version of "Those Damned Blue-Collar Tweekers" and the tongue-in-cheek ditty "Wynona's Big Brown Beaver," a song that they had vowed to never play again. Featuring a nice mix of songs ("The Pressman," "Groundhog's Day," "Over The Falls" and "Southbound Pachyderm") from their catalogue which were augmented by tight and tasty jams, the set ended on a high note as "Jerry Was A Race Car Driver" and "Electric Grapevine" had the crowd bopping, dancing and virtually out of their collective minds with joy. 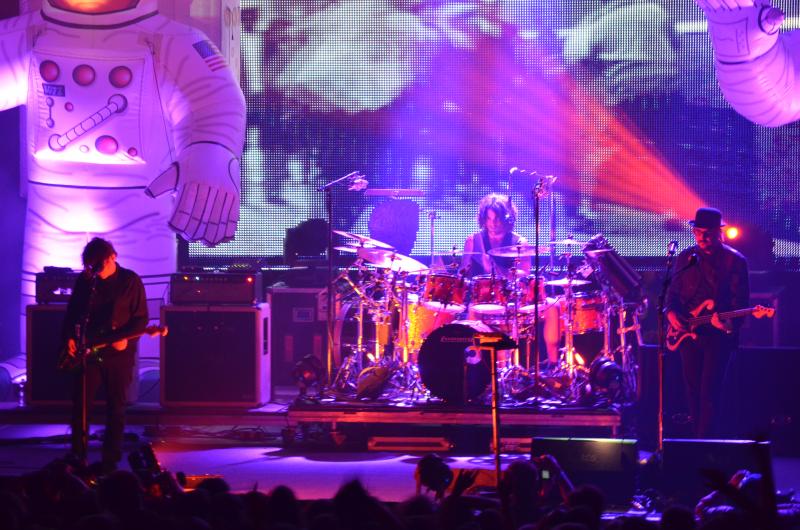 
At this point the band left the futuristic-looking stage for approximately thirty minutes. During this time, the rear projection monitor at the back of the futuristic stage played black and white Popeye shorts.

Set two was a tour through the band's Green Naugahyde (ATO Records, 2011), from start to finish. The new material sounded like vintage Primus, the songs featuring demented sing-song, half-spoken lyrics, throbbing, nimble-fingered rhythms (led by bassist Claypool) and funky jams, with an occasional side trip into flamenco-influenced pop. These songs fit nicely into the Primus canon; they're technically dazzling and completely irreverent, almost twisted. The live renditions of the new material appeared to come with more of an edge than their studio counterparts. As always, Primus' music and lyrics were delivered with a nod and a wink. The highlights from the second set included: "Hennepin Crawler," which could have easily fit in with the songs on Frizzle Fry (Caroline, 1990); "Eyes of the Squirrel" with its interesting beat and bass line; "Moron TV;" "Eternal Consumption Engine," Claypool and company's indictment of the mass consumption that characterizes today's society; "Jilly's on Smack," which features the band's trademark hypnotic, repetitive lyrics—in this case "Jilly's on smack, and she won't be coming back/No she won't be coming back for the holidays;" and "HOINFODAMAN," which takes direct aim at the advertising industry.

With the end of "Salmon Men," the last song on Green Naugahyde and the last song of the set, the audience was sweat-soaked and delirious. By letting the audience help choose the encores, the band was able to dial it back to the early days of their career with the Metallica-inspired "Mr. Knowitall" (from Fizzle Fry) and then even further back (to the beginning) on "Harold On the Rocks" featuring its Rush-meets-Parliament funk groove from their debut Suck On This (Prawn Song, 1990). 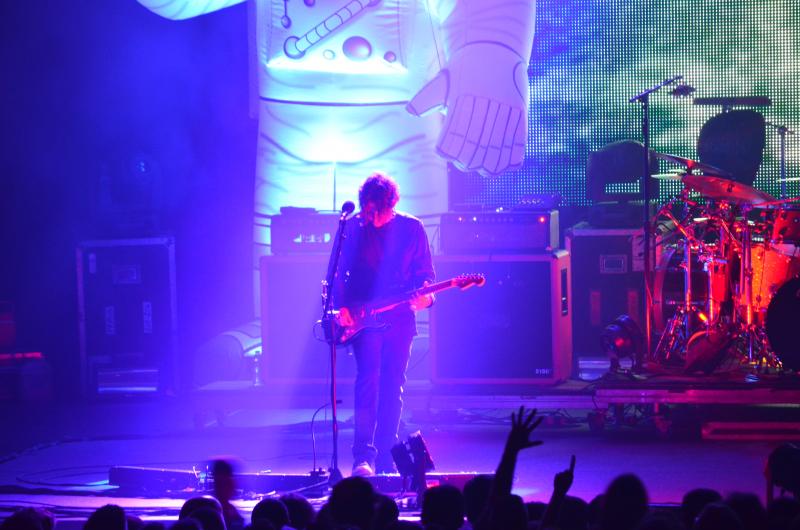 Primus filled the Roseland Ballroom, one of the larger mid-sized venues in New York City, to capacity. In other incarnations it serves as a actual ballroom, and as such the floor is quite large. Unfortunately, the crowd was pressed together so tightly that they couldn't do much more than bop up and down to the music. In addition to the main floor, the balcony was packed to the gills with industry types, hangers-on, guests of the band and a very large contingency of fans who bought mezzanine tickets. With only those pressed against the railing able to get a good view of the proceedings, many of the audience members danced the night away in the back of the balcony and off to the side of the bar.

It is quite satisfying to know that the band (based on its set list as well as stage set-up) hasn't lost its flair for the absurd. Even after a twelve-year hiatus between records (Antipop was released in 1999 on Interscope Records) and a sporadic touring history during that time, Primus still sounds like Primus. And yes, Primus still "Sucks!"