By EYAL HAREUVENI
December 11, 2013
Sign in to view read count 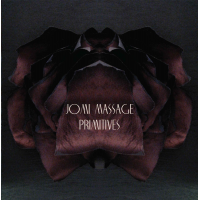 Jomi Massage is the alter-ego of Danish musician Signe Høirup Wille-Jørgensen. The title is borrowed from what she describes as "an innocent but kinky massage-device, from a 60's collection of beauty and health products" (actually, the first electric vibrator available to Danes). She has been active in the alternative Danish scene since the mid-nineties, beginning with the noise outfit Murmur, later morphed into the experimental rock band Speaker Bite Me and since 2000 as a solo artist under the name Jomi Massage. In between, she wrote music for film and theater, collaborated with the DR Big Band under the conduction of saxophonist Lars Møller and recently initiated a project with pianist Jacob Anderskov.

Primitives is a solo project. Unlike former Jomi Massage releases that feature her fronting an alternative rock band, now goes it all alone. She played on all instruments, recorded, mixed and released it on her recently founded label, The Being Music. She was assisted only by poetess Ursula Andkjær Olsen who gave her poetic texts a unique graphical setup.

As on her last release, the beautiful, evocative collaboration with Danish poetess Anne Lise Marstrand-Jørgensen, Dråbers Logik (The Logic Behind Drops) (Greiger, 2012), Jomi Massage creates arresting textures that blends dark, provocative texts with simple yet disturbing atmosphere. The words and the vocals are at the center, and Jomi Massage sculpts the words with great care, alternating between sensual tenderness and furious eruptions, all delivered with captivating emotional intensity. The sound of the album is more minimal and focuses on the piano and its raw sonic spectrum, still she messes and mutates its sounds with various electronic effects.

Jomi Massage vision is pessimistic and dark. She begins as "stillborn and headstrong" on the gentle and spare "Animal of Eden," delivering every word with charismatic command, asserting the sober insight: "this must be paradise when nothing else has been found." The following, powerful "I will be born" is a cry about "the struggle of blood and bones" and life that is just "a taste of the whip, a paper cut finger on crystal still shaking the echoes." Then on "XYZ" she reaches the painful conclusion that "my XheartY beZlongs to the Xsilence between uYs" and on "Flap like a flag" she begs for the "day my face will haunt its fearless grace."

Still, Jomi Massage is determined to find her own place and create some peace of mind in her own uncompromising terms. She accepts that "A fake start is life and all it's endings" but tells herself "the best is yet to come—from hell we all shall come." She promises, on "Stray Arrows," to "levitate on love and hate exciting or forgiven I never fail an immediate clean lust for living" and sound surprisingly optimistic on "The dust & The dirt" even tough she questions "how long will the sound of a breath keep moving." She ends with the enigmatic words: "not enough of much too much search without resistance" on "A knot of broken/not broken."

Powerful and arresting songs from unique and fearless composer.

Animal of Eden; I will be born; XYZ; Flap like a Flag; A fake start is Life; Stray Arrows; The dust & the dirt; A knot of broken/not broken.