Delbert McClinton: Prick of the Litter

By DOUG COLLETTE
January 28, 2017
Sign in to view read count 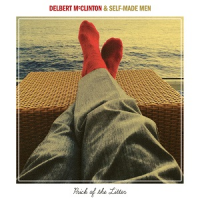 Texas-born Delbert McClinton is one of America's great natural resources. And that three-time Grammy Award-winning reputation is based on more than just his nurturing of John Lennon's interest in the harmonica back in the early '60s when McClinton, as part of the duo Delbert and Glen, were touring with The Beatles. A string of more than nineteen handsomely wrought albums melding, blues, country, soul and jazz is the real foundation of Delbert's reputation and Prick of the Litter adds substantial fortification to the previously laid groundwork of forty-plus years.

In part, that's because the album was largely recorded with McClinton's working band, The Self-Made Men-guitarist Bob Britt, keyboardist Kevin McKendree, bassist Mike Joyce, drummer Jack Bruno and trumpeter Quentin Ware. The chemistry of this group of musicians in action on this record confirm the frontman's perception this is the best band he's ever had: their execution of the arrangements unifies this album as a personal statement of Delbert McClinton's as well as an extension of his previous work (including collaborations with the likes of modern blues icon Bonnie Raitt and contemporary country star Tanya Tucker).

In fact, if there's anything that's preserved the continuing recognition Delbert McClinton's received, commercially and critically, over the decades, it's the very continuity so evident on Prick of the Litter from the opener, "Don't Do It," where an elegant horn arrangement elevates the performance, to the ever-so-nonchalant near-solo conclusion "Rosy." Along the way, McClinton's gravelly voice communicates how hard-earned is the joy within the harmonica playing adorning "Keep Doin' What You Do."

Co-produced by the leader with the guitarist and keyboardist of The Self Made Men (who also contributed to the original songwriting), the twelve cuts here, like "Middle of the Night," are as pithy and to the point as the playing. Even with more involved arrangements, like that of the horn-laden "Skip Chaser," the performances proceed apace (more than a few cuts besides "The Hunt Is On," clock in between two and three minutes), indiscernibly generating momentum as Prick of the Litter progresses.

The aforementioned track is just one reason the record begs regular and repeated listenings though: the highly accessible storytelling of tunes like "San Miguel" is another factor. And then there's the laid-back persona McClinton so wryly concocts as the shares the life lessons within "Pullin' the Strings:" it's well-nigh impossible not to be charmed by such an otherwise irascible soul. Even so, he doesn't overshadow the taste of the instrumental accompaniment, like McKendree's piano on "Neva."

The ivories are also prominent on "Like Lovin' Used to Be," right along with a gently strummed acoustic guitar that, together with the saxophone that's as soft as the female background singing, vividly evokes that age-old era to which the song title refers. The variety of the production of Prick of the Litter is one reason why its forty-minute duration-passes so fast, but, again, that virtue will only add to its durability over the course of time, thus making it (in the handsome form of a triple-fold digi-pak including a poster with lyrics) an essential entry into Delbert McClinton's lengthy discography.

Don’t Do It; Doin’ what You Do; Middle of Nowhere; Skip Chaser; San Miguel; Pullin’ the Strings; Neva; Like Lovin’ Used to Be; Jones for You; the Hunt is On; bad haircut; Rosy.