Jeff Baumeister: Pretty Melodies, for people who dig that sort of thing

By DAN BILAWSKY
February 24, 2014
Sign in to view read count 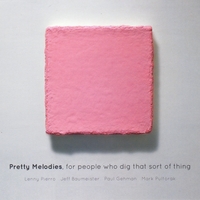 Pianist Jeff Baumeister can't be accused of being enigmatic with an album title or rushing into a recording. It took him eight years to create this frankly titled follow-up to his debut—Useful Music (Wahbo Records, 2005).

Baumeister's first album received some favorable reviews, but the pianist wasn't looking to tread on the same ground with his sophomore date. In fact, he went in a completely different direction, making a one-hundred-and-eighty-degree turn with constructive methodology and working with a completely different band. Baumeister, in another example of his forthright deportment, notes that "Useful Music was basically craft then inspiration, while Pretty Melodies was inspiration then craft." In other words, Baumeister didn't try to force a writing situation or turn composition into an overly calculated process this time around; he just waited for the melodies to make themselves apparent, which they did in due course.

None of the eight tracks on Pretty Melodies, for people who dig that sort of thing paint Baumeister as a unidirectional composer. Sometimes he works with melodic grains, yielding something wondrous from a simple source ("From Here"), and other times he's more calculating in the way he susses out his sounds. Buoyant waltzes, understated soul ("Folk Tune"), deep grooves ("Everything Is Nothing"), and peaceful passages ("Leaving") all provoke different reactions from the ear and point to the fact that Baumeister has a lot of different sides to his personality. His band mates—straight-from-the-heart saxophonist Lenny Pierro, bassist Paul Gehman and drummer Mark Pultorak—also deserve their fare share of the praise, as they help to magnify the intentions that live within each of these pieces.

Pretty Melodies, for people who dig that sort of thing lives up to its self-described mandate, but it doesn't contain saccharine-sweetened themes or dumbed-down ditties. Instead, it highlights the work of an individual who proves to be a lover of melody, the possessor of a keen ear, and a man who understands that creativity and accessibility need not be seen as opposing forces.

From Here; Residue; Blood; Folk Tune; Ok, Now What?; Everything Is Nothing; Turnaround, Half-Step, Toodle-oo; Leaving.