By DAN MCCLENAGHAN
November 9, 2011
Sign in to view read count 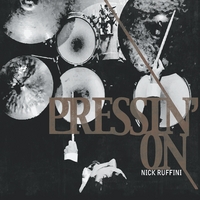 The Hammond B-3 organ blew into jazz in a big way in the 1950s and 1960s. Employed mostly in small group settings—trios and quartets—the soulful, urban, deep groove music became hugely popular at that time, thanks to organists Jimmy Smith and Jimmy McGriff, as well as guitarists Wes Montgomery and Grant Green, among many others. The B-3 organ remains a popular form of jazz vehicle to this day, through the recordings of groups like Chicago's tradition-steeped Deep Blue Organ Trio and the more modernistic keyboardist Sam Yahel.

So it's a talent-filled and ongoing tradition into which drummer Nick Ruffini throws the sticks on Pressin' On, his recording debut as a leader. Ruffini's style—one of nailing down a rock-solid groove inside the cool and gusty organ sound—is perfect for this bluesy and danceable jazz form. Enlisting guitarist Johnny DeFrancesco to share in the tune-smithing and producing chores, Ruffini's Pressin' On has a distinctively crisp sound and the soulful momentum of the best in the genre.

DeFrancesco records with his brother, organist Joey DeFrancesco, as The DeFrancesco Brothers, and he fronts his own Johnny DeFrancesco Power Trio; so he would be expected to elevate the proceedings, and he does just that. Four of the disc's seven compositions are his, with three others co-written with Ruffini. He is a stellar guitarist with roots deep in the blues. He is also able to take it out there and wail, or lay down a snappy rhythm for the Rich Budesa's energetic and succinct organ work to ride on. The sound gets a big boost from bassist Paul Klinefelter, who plays with the Harrisburg Symphony Orchestra, but has no problem getting funky when the situation calls for it. Many—if not most—organ jazz groups go without the bass, leaving those chores to the organists' left hand and/or pedals. With Klinfelter in the mix, the sound has more solid foundation, serving as a duel anchoring alongside Ruffini's drums that seems to juice up the organ and guitar and let them fly.

The outstanding Pressin' On comes straight out of the soul-drenched organ jazz tradition, with more vehemence and verve in its approach than most. It feels a bit more of a danceable good time, with a surprise on the closer, DeFrancesco's "E.M.W," that drones into existence on a dark groove that shifts into a roiling turbulence over a backdrop of Ruffini's drum thunder—a great closer to an excellent debut.