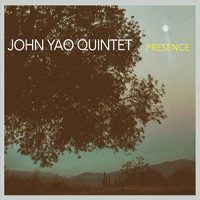 As human beings we tend to take the very notion of presence for granted, be it the presence of a loved one in our lives, the presence manufactured by our own actions as we present ourselves to the world, or the presence of all that comes and goes in our daily existence. For some reason these things just rarely factor into the way we think from moment to moment. But they should.

Those multiple dimensions of meaning in the word presence have all folded upon one another in trombonist John Yao's third album to date. The loss of a close friend, the growth of an artistic voice, and the little moments that add up to bigger things are all cataloged in Yao's intriguing compositions. There are wistful passages that offer up reflective thoughts for those on both sides of the performer-listener divide, dynamic expressions of strength and motion powered by emotional undertows both light and dark in nature, and full-on embraces of what is, what was, and what may come to pass.

After presenting a super-sized sophomore date—the big band-focused Flip-Flop (See Tao Recordings, 2015)—Yao now returns to the quintet format which served him so well on his maiden voyage. By downsizing and moving back to a party of five, he automatically creates greater flexibility and opportunities for all involved while clearly charting his own growth as the leader of a small band. That first flight—In The Now (Innova Recordings, 2012)—was an impressive debut, but this is a clear cut above. Yao's voice on trombone has become considerably stronger and more fluid over the intervening years, his rapport with saxophonist Jon Irabagon has deepened since they appeared together on that debut, and his compositions seem to operate with greater power and weight now. Yao isn't exactly a new man, but he's most certainly an evolving artist who continues to grow at a rapid pace.

This outfit makes its entrance on Presence with "Tight Rope," a taste of off-kilter funk that offers space to both horn men. Irabagon, on soprano here and on six of the seven other tracks, reaches fever pitch with feverish flurries before Yao counters with a more grounded statement. All the while Randy Ingram creates a glaze underneath with his Rhodes while bassist Peter Brendler and drummer Shawn Baltazor groove away. It's the perfect opener, but it's indicative of nothing. Each song operates in its own space here and the music doesn't want or need for any large overlap in attitude and direction. "M. Howard," for example, eulogizes a friend by moving from a pensive place to a more excitable realm; "Fuzzy Logic," shifting further left, is both oblique and rough-and-tumble in its intentions, owing certain debts to the work of Ornette Coleman while refusing to bow at any altar; and "Bouncy's Bounce" is simply a swinging delight, largely moving down the middle while soloists occasionally grab the steering wheel and swerve. Yao, a clear rising star with a lot to say, never says the same thing twice on Presence.