Jeff Lang: Prepare Me Well: An Introduction to Jeff Lang 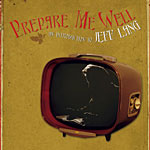 Prepare Me Well compiles material from singer/guitarist Jeff Lang's ten previous releases. Though he's well known in his Australian homeland and other parts of the world, Lang's introduction to American audiences is long overdue. Influenced by Bob Dylan, Lang sings original songs that tell a story. His up-close and personal interpretations leave us with plenty to think about. His easy to understand lyrics prove delightful.

Bateman's Bay tells about hoping and waiting from an acoustic folksinger's point of view. We've all been there. "Prepare Me Well, on the other hand, deals with what could happen in a somber tone that lives and breathes the blues. "Gina," a previously unreleased track, laments from a bleak ballad background about how things have turned awry. "Cedar Grove, another previously unreleased piece, employs a folk tradition to express sadness and dismay. "Rain on Troy gathers the songwriter's experiences together for a tale of regret and longing.

Too Easy to Kill moves away from Lang's traditional folk presence and instead drives into a fierce political arena. The lyrics (all included in the liner booklet) provide an adventurous foray into contemporary and progressive territory. Lang's creative position on this blazing-fast tirade gives him a unique presence that is sure to be noticed. He's so overwhelming that you can't help wanting more. Fortunately, there's plenty of music here, and it gives a good cross-section of his many musical ways to tell a story.

The Save; The Road is Not Your Only Friend; London; Molasses and Stone; Whatever Makes You Happy; Too Easy to Kill; Mr. God; And All the Snow Melted; Bateman