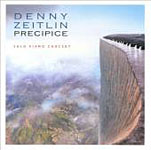 The singular mission of Denny Zeitlin continues with Precipice, the recorded document of a concert in January, 2008 at Ralston Hall, Santa Barbara, California. The experience is at once predictably exquisite as it creates a state of a type of suspended animation, floating with utter weightless abandon, as composer and pianist, Zeitlin flies over the edge of its proverbial cliff seduced by the thunderous cascade of music. This is how the music builds up to that frenetic quantum energy by the time Zeitlin reaches the middle of John Coltrane's "Fifth House," the final theme of Zeitlin's magnificent version of "What Is This Thing Called Love." The build up to "Fifth House" features some of the most majestic and ingenious improvisation on record. From an exquisite cadenza through the melodic invention of the main body of the piece, Zeitlin reigns supreme. His touch is impeccable. His ideas rush like the rumour of a raid. His invention is unstoppable as he plays phrases inside out and lines that appear to ascend melodic mountains then drop suddenly as the lines fade into oblivion.

Throughout the program, Zeitlin does something else with verve and splendor: he swings like the wickedest cat since Art Tatum. His left hand swerves and swaggers while his right hand makes florid whorls of the melody of the songs. His left chases down the melodic invention of his right hand with dense harmonic chords clusters as in "Out Of My Dreams." Then the hands may switch roles; a rumbling melodic phrase with the left and a naughty tinkle with the right, at the far end of the keyboard. All this in the space of a beautifully stated metaphor, explaining "The We Of Us." The mystery of the title becomes the magic of the rhapsodic song as Zeitlin puts imaginary arms around his love while no one is looking. This sprightly crepuscular encounter is followed by the more dense melody of "Deluge," which is meandering diversion before the breathlessly paced and superbly controlled "Oleo." The song's bop melody bookends a riotous improvised body that completely reinvents the original lines of the Sonny Rollins classic.

Zeitlin's "Love Theme from the Invasion of the Body Snatchers" is the tenderest moment of the set. A marvellous ballad, the melody pulsates like the heartbeat of lovers entwined. The ebb and flow of the song line unfolds breathlessly and with a charm of its own. That chart is only a stop away from the crescendo of "Pulsar" and "Precipice," a song with its own mercurial, wind-up which virtually explodes at the end. As a solo pianist, Zeitlin has made a significant contribution to the literature of piano music with Precipice. Although radically different from Keith Jarrett solo records and more like those of Herbie Hancock and Chick Corea, this album is a timeless masterpiece from one of the greatest exponents of virtuoso pianoforte in the last two centuries—Denny Zeitlin.