Monique Canniere: Preachin’ to the Choir 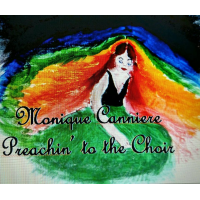 Violinist, composer and vocalist Monique Canniere began her musical career, one suspects, like many other violin players: By playing traditional Celtic music in competitions and folks festivals, which she did from the age of six with her musician father, Vic; and by earning her BM in performance (from Mansfield [PA] University, where she performed as violinist and vocalist with the MU Jazz Ensemble and as concertmaster of the MU Symphony, and was also a member of the nearby Williamsport Symphony).

But Canniere's career has since continued, one also suspects, along a unique trajectory: She received a full tuition scholarship to the 2003 Henry Mancini Institute at UCLA, where she studied and performed with such artists as Christian McBride, Diana Krall, Oregon and Gunther Schuller. She subsequently attended the Masters in Jazz Studies program at the University of the Arts in Philadelphia, where she studied under John Blake. Now based in Philadelphia, Canniere is featured soprano and chorister in the Choir of the First Presbyterian Church in Philadelphia; performs as lead violinist, vocalist and "vocalinist" (her term for simultaneously singing and playing violin) for The Divine Hand Ensemble, Philadelphia's uniquely contemporary electronic/acoustic classical ensemble led by thereminist Mano Divina; and continues to work on her own music.

Canniere's self-produced solo debut Preachin' to the Choir weaves, with colors lent by Sarah Brightman and Tori Amos, these classical and popular, sacred and secular, musical threads into whole cloth. "Gratia Plena" and "Dona Nobis Pacem," which overdubs her voice into an acapella choir, are clearly hymns. Other pieces, such as "Earth in Heaven" and her slide guitar-infused country-gospel song of "Gratitude," are hymns not in structure but in purpose.

Preachin' to the Choir ends with two of the set's strongest compositions, the classical fusion "About Time" and contemplative "Walk in the Woods," through which Canniere's violin wanders with more of a homespun fiddle than classical violin sound.

But its emotional core centers elsewhere, on three consecutive tunes: The bright, jumping violin interlude "Unbroken," which thematically and musically segues into "I'm Not Humpty Dumpty," a song of thanks to "everyone who loves me" who "put me back together again" rendered in a whimsical piano sound, like a child trying to figure out where the melody's hiding in the ivories. "Humpty Dumpty" falls into this set's only cover: "Rainbow Connection," co-written by Paul Williams for the most memorable scene from The Muppet Movie (1979). Canniere's vocal is perhaps too accurate here, as this song benefits from a more "homespun" approach. But "Why are there so many songs about rainbows?" is more than just a great opening line to this song; it's an accurate summation of the sense of wonder and grace that quietly peeks from the corners of Preachin' to the Choir.