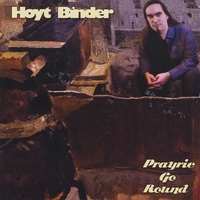 "Eclectic" is the word that most spontaneously springs to mind when listening to the debut album by Hoyt Binder and it's clear that this guitarist has been influenced by some of the greats, which by his own admission include Jeff Beck, Jimi Hendrix and Frank Gambale. Additional solo duties are performed by violinist Trevor Lloyd, who contributes valuable tonal color to most of the tracks. Binder's playing is curiously addictive. He doesn't fall into a trap of shredding, nor does he overly employ effects pedals or synthesizers. In addition to the musicianship, the strength of the album lies also in the compositions, which retain interest throughout.

The opening "This is Why" is an eerily dramatic piece, involving a section of a spoken recitation of a Wounaan prayer ceremony. Both engaging and highly atmospheric there is plenty of reverberated guitar, and sympathetically fluid violin used to good effect. "Hip to Believin'" ratchets up the mood considerably, a joyful piece of well-constructed funk jazz with a great, catchy guitar riff. "I Found You" opens, with a Jean-Luc Ponty-type violin theme developing further with guitar and violin interplay, Binder eventually taking up the initial theme.

ADVERTISEMENT
The anthemic "Missing Donnie" strays slightly further into the rock/blues side of things but still maintains a jazz feel, giving bassist Paulo Gustavo a chance to solo. "Trip Over" is a funky number with fast metal guitar licks throughout, but interspersed with Lloyd's ruminative violin acting as an antidote to the paradoxically heavier guitar style. The aptly titled "Insecure" transforms the proceedings into a more reflective mood, and here Binder's glissando guitar entrancingly begins to emulate some of the hypnotic elements created by psych blues guitar virtuoso Harvey Mandel. Reverse guitar comes into play on the trippy "Numb Goodbye," dissolving into a more conventional track held together by melodic guitar lines.

Violin opens the quieter "Leap of Faith" which slowly builds in volume and dynamics. It is here that Binder satisfyingly reveals his acoustic side, trading fours with Lloyd. "You'd Better Catch Me," the penultimate track, is a fiery display of multi-tracked guitar, again tempered by quieter violin passages which, as with most of the album, affords some breathing space that, in turn, enhances the overall sound.

The final, title track aptly characterizes the eclectic nature of this album, drawing on a multitude of influences from psychedelia to Western classical music; even the opening drum pulse might represent another small nod to that Panamanian Embera-Wounaan tribe. This is a very deft debut album, indeed, from an original and talented guitarist and a fine group of accompanying musicians, its overall qualities being originality and lack of well-worn clichés. Hoyt Binder has something new to say and he says it well.

This is Why; Hip to Believin’; I Found You; Missing Donnie; Trip Over; Insecure; Numb Goodbye; Leap of Faith; You’d Better Catch Me; Prayrie Go Round.