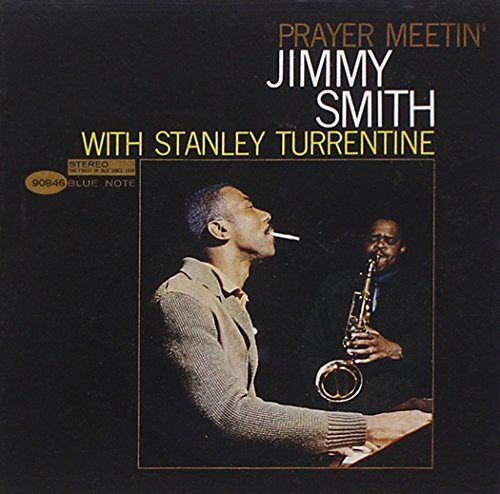 Jimmy Smith and the late Stanley Turrentine were one of the great organ-sax combos, collaborating on a series of albums for Blue Note in the early '60s that helped define the genre of soul jazz. The last of those efforts was 1963's Prayer Meetin' , made at the end of a flurry of recording activity by Smith (four albums in a week's time) as he rushed to complete his contract with Blue Note before heading over to Verve.

Just reissued in a new RVG edition, the album delivers a typically soulful blend of blues, R&B and bebop highlighting Turrentine's lush tenor sax and Smith's always grooving Hammond organ. With guitarist Quentin Warren and drummer Donald Bailey helping out, the ensemble serves up authoritative takes on Ivory Joe Hunter's "I Almost Lost My Mind," Gene Ammons' "Red Top," as well as a handful of Smith originals, including the rousing title tune. A slow-paced reworking of "When the Saints Go Marching In" is the album's only miscue.

Prayer Meetin' also includes two bonus cuts, "Lonesome Road" and "Smith Walk," originally recorded in 1960, shortly after Smith's classic Back at the Chicken Shack and Midnight Special albums. These tracks are notable for the addition of the fine bassist Sam Jones, the only time Smith recorded for Blue Note with a bass player.