Azar Lawrence: Prayer For My Ancestors 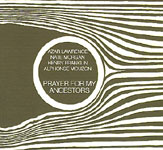 Azar Lawrence is a man on a mission. His task: to express beautiful, healing music.

At a young age, Lawrence was already touring and recording with jazz legends like Elvin Jones, McCoy Tyner and Miles Davis. Then, after recording several successful albums, including Bridge into a New Age (Prestige 1974) and Summer Solstice (Prestige 1975), decades inexplicably passed before he would lead another studio session. Lawrence still played and recorded with a wide array of great artists like Stanley Turrentine, Woody Shaw, Earth, Wind and Fire, and Marvin Gaye. However, he didn't take his own bands into the recording studio.

Thankfully, Azar Lawrence is back and blowing his tenor and soprano saxophones

Prayer for My Ancestors, on the relatively new Furthermore Recordings label, is a collaborative labor of love made with the help of many friends, both old and new. The quartet consists of Los Angeles piano great, Nate Morgan, Henry "the Skipper" Franklin on bass, an old friend from their years in Horace Tapscott's Pan Afrikan Peoples Arkestra, and former colleague in McCoy Tyner's band of the mid-70s, and Alphonse Mouzon on drums.

Lawrence's opener, "Open Sesame," begins with his tenor sax blowing a solemn incantation, as if summoning the eternal spirits to join him in joyous musical celebration. Then, Mouzon's shimmering cymbals and crashing drums and Morgan's palpitating piano enter the ceremony. Suddenly, the band takes off on an up-tempo journey to a magical place.

On another original, "Thokole," native Senegalese musicians Ibrahim Ba (vocals, guitar), kora (21-string lute) master Amadu Fall and the band create a gentle groove that conjures visions of majestic ibex and impala roaming the savannah. Enter Lawrence, who then breathes mystical magic from his soprano sax on this serene journey to the Motherland.

On the title tune, the rhythm section builds slowly rising waves of aural beauty, particularly Franklin's bowed bass, that washes over like the mighty falls of Victoria. Lawrence, on tenor, then pours forth a profoundly soulful expression of gratitude to the land and the people of Mother Africa.

Morgan's "Swinging in Exile" is a powerful, rhythmic, hard-bop tune that burns hot as North Africa's sirocco winds. Guest Roy McCurdy's relentless drums and Morgan's roiling piano runs propel the band to a frenzy. Meanwhile, Lawrence blows with an urgency and insistence that commands attention to his swinging message.

The always eloquent and insightful reed master John Stoddart was once quoted as saying, with great enthusiasm, that saxophonist Bill Evans (saxophone) was "playin' a lot of shit." Well, it's clear from one listen to this CD that Azar Lawrence is also "blowin' a lot of shit." Whether playing a languid ballad or a hard boppin' blues, Lawrence pours every ounce of his body and soul into the music.

With all the sadness and loss the jazz community experiences, it is a medicinal injection of peace and joy to hear Azar Lawrence burning it up again.