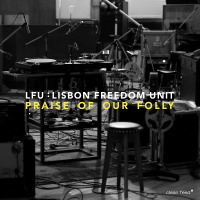 History has repeatedly demonstrated that it may be foolish to bring together large numbers of musicians without any form of roadmap. Those who have set out the slender case for the opposing view include the Globe Unity Orchestra and Peter Brötzmann's Chicago Tentet, but not many more. To that number should now be added the Lisbon Freedom Unit, a summit meeting of Portuguese talent, convened by guitarist Luis Lopes. It helps that so many accomplished improvisers are on hand, such familiar names as saxophonist Rodrigo Amado and the members of the RED Trio, as well as the less-storied like reedman José Pedro Sousa, whose Casa Futuro (Clean Feed, 2015) was an overlooked gem.

Critical to their success is a willingness to subsume ego at the appropriate times in the service of the greater good, allied to an acute feel for when to step forward. Add to that musical expertise in placement, selection of pitch and volume, and mastery of texture. All these positives are embodied in "I.," the first of four collective journeys recorded in the studio in 2015. It begins with a pointillist melange of flutters, piano strikes, hums and susurrations, which gradually builds in density without ever breaking into a recognisable solo, yet manages to derive an emotional weight from the richness of detail, delivered at glacial pace.

"II." reveals the ensemble's ability to forge ahead meaningfully at speed. Piano, strings and drums supply a spiky bedrock, combining with guitar to propulsive but arrhythmic intent. As momentum accrues, the horns join, with Sousa's tenor in what might be simultaneous soloing with Bruno Parrinha's soprano and Rodrigo Pinheiro's piano, but might equally well be a saxophone duet with comping, or some other arrangement entirely. It is open to interpretation and can sound different on each pass depending where the listener chooses to focus attention. What remains unchanged is the sense of adventure and excitement which it engenders.

Such episodes of ambiguity abound in this program, not least in the high energy "IV.." Sousa again impresses, evoking a particularly impassioned Evan Parker with his chuntering tenor, before a triumvirate of reeds takes command. There follows a lengthy low-key but nuanced withdrawal in which communal action prevails. By the end, the only conclusion is that without doubt we should wholeheartedly give thanks for the folly overcome which this disc represents.