By ANDREW VELEZ
December 16, 2007
Sign in to view read count 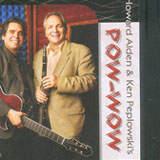 Whether you were fortunate enough or not to have caught Howard Alden and Ken Peplowski's 2007 reunion art New York's Bargemusic, Pow-Wow will do very nicely to dig these longtime musical good companions. Much of the Barge evening drew upon Pow-Wow, offering a perfect, quietly spectacular skyline setting for these two, both who eschew pyrotechnics. Their playing is exciting enough in its simplicity. Hearing their variety, range and richness can make it seem like listening to more than just two players.

The title track (guitarist Joe Puma's tune, based on the changes of Ray Noble's "Cherokee ) starts the CD off in such jumping synchronicity that Alden's guitar and Peplowski's tenor sax seem to be a multi-voiced single instrument. Another high point, "Did I Remember?, is a gem which Billie Holiday sang on her first recording date. For this nostalgic tune Peplowski switches over to clarinet, and together he and Alden conclude it with a burst of especially exhilarating improvisation.

On Duke Ellington's rarely heard "Who Knows, which is somewhat bop-ish in flavor, Peplowski is again on clarinet as he trades playful licks with Alden. It's followed by "After All, a thoughtful Billy Strayhorn beauty, on which the warmth of Peplowski's clarinet is ever so gently supported by Alden. In playing a set that refreshingly mixes near-classics and lesser known nuggets, they cast a spell as emotionally strong as it is thoroughly modern.

Pow-Wow; Dream Dancing; Did I Remember?; Very Early; Who Knows; After All; Bossango; I See Your Face Before Me; Tempus Fugit; The Land of the Loon; The Things We Did Last Summer; Panama; Lucky To Be Me.