By JEFF DAYTON-JOHNSON
December 30, 2008
Sign in to view read count 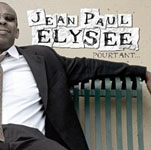 Pourtant..., from Parisian vocalist Jean-Paul Elysee would not likely have popped up on AAJ's radar had it not been released on Aphrodite Records, a solidly all-jazz label. While decidedly jazz-accented, this record is another animal altogether, a contemporary heir of the French chanson tradition of Georges Brassens and Boris Vian.

As such, this music is small-combo stuff, relying heavily on barely-audible but always evident guitar strumming; sophisticated yet immediately catchy melodies, like Elysee's historical models. There is a mix of tempos, successfully fusing the French originals with cool soul and jazz elements. Pianist Lars Segoni is the real thing, a capable jazz accompanist; many of the other instrumental accents sound self-consciously jazzy at times, but no less enjoyable for all that.

Likewise, the lyrics, all in French, aspire to the quality of poetry on the printed page, a standard which these generally attain. For example, "Je suis un Parisien"—I am Parisian—wittily pokes fun at Parisians and non-Parisians in about equal measure.

The title track—"Pourtant"—means roughly, "And yet..."—stakes out a lyrical ground akin to that favored by a nostalgic mid-sixties Sinatra: "And yet/ if you were to propose to me now/ to go for another hundred years/ I'm in..." All this to a tune vaguely redolent both of Shirley Horn's "Estate" and the Stylistics' "You Make Me Feel Brand New"—fine songs, both.

These songs will speak directly to a readymade French audience, but could well find a welcome ear worldwide. In that respect, Elysee resembles Brazilian neo-Bossa Nova champion Celso Fonseca. In addition to having slight but silken voices in the tenor range, both are seeking to revitalize older popular musical forms—chanson francais; bossa nova—for younger audiences at home and globalized audiences elsewhere, shortchanging the expectations of neither group in so doing. If that were as easy as it sounds in these breezy performances, more musicians would be doing it. And they aren't.