The Hot Club of San Francisco: Postcards from Gypsyland 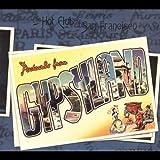 With their ninth CD release, the Hot Club of San Francisco brings a contemporary, acoustic, all-string jazz band to the music of Django Reinhardt and Stephane Grappelli. Theirs is a pleasant outing, performed with brilliant musicianship and built around a theme of romantic passion.

Reinhardt's memorable "Nuages" is given lyrics and dressed up in sensual attire. Like most of the program, this familiar anthem pours gently from the heart without having to bring overt emotions into the formula. The music sinks in gently and casts a soothing cloud over the room. Violin, bass, and guitars swing lightly with laid back enthusiasm. The use of melodica to emulate an accordion's cultural ties brings this swing band even closer to the original.

Evan Price, of the Turtle Island String Quartet, leads with an excellent violin performance. Guitarist Paul Mehling and bassist Ari Munkres add significant voices to the band's musical interpretations. Their performance has a calming effect that lasts. Even the ensemble's brighter, up-tempo swingers, such as "Lover's Lead" and "Jonesin'," can leave you feeling completely relaxed and ready for bed. They've honored the memory of Django Reinhardt and Stephane Grappelli, while keeping cool in the shade of some countryside corner that's far removed from the hustle and bustle of urban life.

About Hot Club of San Francisco