By BRUCE LINDSAY
October 18, 2011
Sign in to view read count 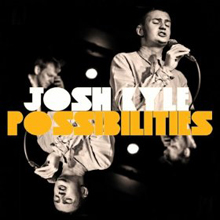 Possibilities, the debut album from singer Josh Kyle, is modestly titled. Although he's still only 24 years old, the Australian-born/London-based artist is not merely a singer with possibilities; he's already a mature and innovative vocalist and lyricist.

Kyle's chosen an out-of-the-ordinary mix of songs, combining classics with originals and adding his own lyrics to tunes by such master composers as Herbie Hancock ("Proof") and Wayne Shorter ("Is It Yes Or Is It No"). The choices indicate that the singer is a man who knows something of the history of vocal jazz, and that his aim is not simply to reinterpret, but to expand and invigorate the genre.

He's got confidence in his own vocal ability, too. He opens the album by singing the first verse of Hoagy Carmichael's "Stardust" unaccompanied, displaying a strong, positive, approach and an evocative sound. The first few notes have an androgynous quality, high and clear, and Kyle's interpretation of this old standard is quite beautiful. His vocals are silky and soulful, recalling the underrated Lewis Taylor on the upbeat, optimistic title track, and in the late-night regret of deSilva, Brown and Henderson's "The Thrill Is Gone."

There are a couple of weaker numbers. Djavan's "Amazon" doesn't really reach the heights of the other songs, its rather strident lyrics possessing something of the polemic about them. Kyle's vocal on Thelonius Monk's "Round Midnight" is technically impressive but occasionally too melodramatic. But overall the standard is extremely high, and "Save The World" and "Roll On"—written by Kyle and bassist/producer Geoff Gascoyne—have a relaxed, likeable, soul-jazz groove.

Kyle is accompanied by a top-drawer set of musicians. Drummer Ralph Salmins is exceptional throughout, while guest guitarist Jim Mullen adds understated but evocative solos to "The Thrill Is Gone" and to "Is It Yes Or Is It No," which also benefits from vocalist Claire Martin's graceful performance.

Possibilities heralds the arrival of a strong new talent. Kyle is a welcome addition to the roll call of jazz vocalists, with an ear for the fascinating but underrated classic as well as a talent for original lyrics.

Stardust; Possibilities; The Thrill Is Gone; Amazon; Save The World; Driving on the 502; Roll On; Proof; Round Midnight; Is It Yes Or Is It No; The Prize.