By MATTHEW MILLER
October 15, 2007
Sign in to view read count 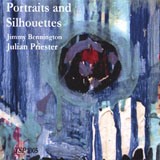 Onstage at Spike Hill in August, 2007, a bar-cum- performance space in the bougie heart of Williamsburg, Julian Priester addressed his fans with unadorned deliberateness, the spoken equivalent of his trombone playing. "Music is magical...[a]willingness to expose your most vulnerable self...to discover that it's OK to expose your most vulnerable self. The 72 year-old trombonist has embodied that ethic over a fifty-year career, adding a dimension of vulnerability to a predominantly bop vocabulary and thriving in diverse musical settings.

On Portraits and Silhouettes, the soft-spoke veteran is joined by the relatively youthful, 37 year-old Jimmy Bennington, whose incisive percussion work gently propels the session. A resident of Chicago—Priester's hometown—Bennington is at his best as an effervescent foil to Priester's glowing, often laconic statements. On the title track, he sustains a whitewash of cymbal noise while punctuating and responding to Priester's statements with mallet accents or a well-placed bass drum thwack. The modus operandi is the same on "Mood Indigo and "Blount —a Bennington original in homage of Sun Ra—and on each, the trombonist responds with vigorous, bop-inflected retorts.

The duo format suits both men well, as does the repertoire—a series of originals, covers and free improvisations that caters to their shared avant-garde leanings. On record and in person (with drummer Aaron Alexander) Priester revels in the freedom the tunes and lack of harmonic backing allow. His solos grow organically, unencumbered by fixed forms or expectations. They soar to unexpected vistas, take strange turns and end up where you least expect them: who could ask for more?