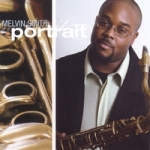 There is nothing newfangled here, but if mainstream bebop jazz saxophone is to your interests, then you will give this debut high marks.

Melvin Smith is a native of Jacksonville, Florida. Armed with a scholarship to the Berklee College of Music, he was also honored there with the Lennie Johnson Award after graduation. Smith then studied under Jimmy Heath at the Queens College (New York) music department, gaining his Master's Degree in 1999.

Smith uses his church-going beliefs in the composition of his music, and the more secularly known tunes. The opening "Lord I Lift Your Name on High," written by M.O'Shields, is transmogrified as a semi-calypso that would get a nod from Sonny Rollins. On the traditional medley "Go Down Moses/Wade in the Water," Smith's arrangement is straight out of the classic early 1960s Blue Note sound. The tenor saxophonist jumps out and provides a masculine and melodic solo that is redolent of Hank Mobley at his best. Trumpeter Reggie Pittman shows that he is no slouch, with a solo that conjures up some Kenny Dorham vibes.

On Billie Holiday/Arthur Herzog's "God Bless the Child," Smith engages in a lengthy tenor sax duet with pianist Gregory Royals, which begins as a reflective ballad and then intensifies during its almost eleven-minute stretch. Smith brings a more reverential tone to Donnie Hathaway's "Someday We'll All Be Free," and picks up the soprano sax for his own "Manasseh" and Pete Seeger's "We Shall Overcome."

This album links in with the early 1960s Donald Byrd efforts including A New Perspective (Blue Note, 1962) and I'm Tryin' To Get Home (Blue Note, 1964). Although these releases were far more ambitious in delivering gospel jazz, Smith's first release imparts the same feeling.

Lord I Lift Your Name On High; Go Down Moses/Wade in the Water; Manasseh; Trylenera (part 1); Someday We'll All Be Free; 1750 Washington St.; God Bless the Child; Trylenera (part 2); We Shall Overcome.