By DAVID ADLER
February 7, 2010
Sign in to view read count 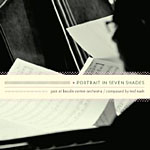 The Jazz at Lincoln Center Orchestra (JLCO) is often derided as a bastion of conservatism, although it's not clear what is conservative about an epic like trumpeter Wynton Marsalis' Congo Square (Blue Note, 2007), with its volleys of Ghanaian percussion and ensemble-singing in the Ga and Fante dialects. For that matter, the JLCO accommodates boundary-pushing musicians like Ted Nash, who holds a multi-woodwinds chair while still doing offbeat work with the likes of bassist Ben Allison and pianist Frank Kimbrough—not to mention his own groups, including Odeon and Still Evolved.

Portrait in Seven Shades is Nash's entry as an JLCO resident composer and the focus here is avowedly European (a stark contrast with Congo Square's Africa via New Orleans). Each of the seven movements takes inspiration not only from a particular painter, but also from a set of specific canvases in that artist's oeuvre, as explained in the CD booklet. The orchestration points to Duke Ellington and Gil Evans in roughly equal measure, although hard-bitten blues vocabulary plays an overt role, most notably in Dan Nimmer's swinging piano trio setup on "Matisse." Perhaps most striking is the unsettled 13/8 meter and smeary high-register brass of "Dali," which apportions solo space between trumpeter Marcus Printup, drummer Ali Jackson and Nash on alto saxophone.

JLCO head and star trumpeter Wynton Marsalis follows trombonist Vincent Gardner with a fiery statement on the multi-sectioned, cubist-inspired "Picasso." Gardner returns for a romantic, Johnny Hartman-esque vocal feature—something altogether new in Nash's writing—on the ballad "Van Gogh," again offset by Marsalis as the featured horn. Later, jittery swing and tumbling swirls of eighth notes set the stage for the closing "Pollock." Only "Chagall," with accordionist Bill Schimmel, violinist Nathalie Bonin and tubaist Wycliffe Gordon articulating Jewish/Eastern European themes, seems a bit strained and obvious in trying to connect sound and subject matter. The other movements leave more to the imagination. Listeners are free to read Nash's lucid explanations in the notes or simply let the music connect the dots.