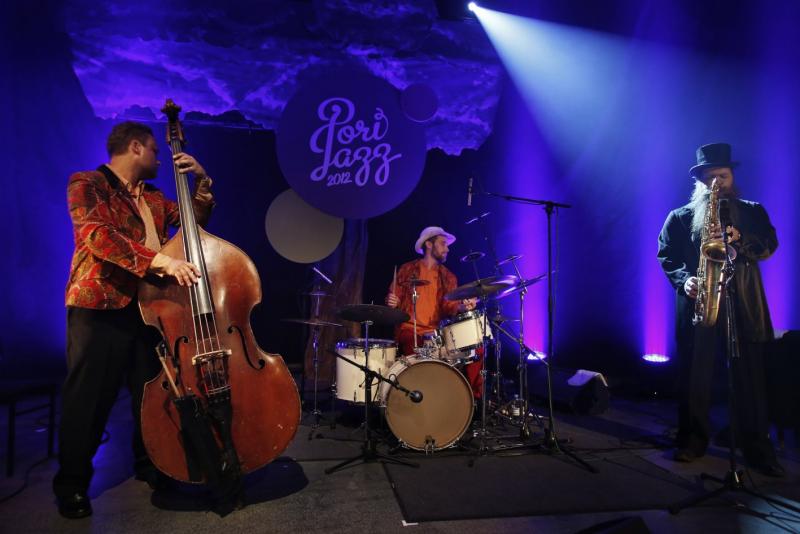 On a scale of 1-10, summertime activity in the capital of this northerly European nation barely registers a "1," whilst in the normally sleepy western coastal town of Pori it is topping out for the penultimate week of July. It's the annual Pori Jazz Festival. Along with over 1,000 local voluntary helpers, there were about 140,000 visitors this year attending about 120 concerts, of which almost 70% were free. And on top of this there was a whole week of children's activities and concerts involving over 20,000 kids with over 2,000 performing.

As ever, the festival proper sees a collection of major international artists, often on extended European summer tours, alongside a strong showing of Finnish musicians, vying for a slice of the attention. Ever since 17-year old saxophonist Jukka Perko stepped up beside trumpeter Dizzy Gillespie in 1986, the chance of international exposure has kept this festival among the top favorites for aspiring local professionals. However, the photos on the official program showed exclusively the roster of international artists, from Paul Anka and Norah Jones to UK star and Simon Cowell favorite Emeli Sandé and New York's Estelle (Fanta Swaray). These continue to pull in the Finnish audiences who transform this old harbor town into a hub of fun and festivity for the whole country in mid-July.

With accession to the organizational committee of Helsinki producer and jazz DJ Markus Partanen, the strength of the contribution by jazz musicians has been underscored, and inevitably Finnish artists predominate. Among those appearing again at Pori Jazz were veteran swing reedist Antii Sarpila, saxophonists Manuel Dunkel and Timo Lassy, pianist Jukka Uotila, trumpeter Verneri Pohjola and "action-jazz," little big-band, Auteur Jazz. Six of the nine evenings at the riverside Café Jazz were sold out, and even the nearby church had standing room only for a return performance by Perko. On less auspicious stages were street performers Elonkorjuu, and the banner-waving, pseudo agit-prop-styled Bad Ass Brass Band, as well as a host of other entertaining and engaging artists.

Alongside these mainstream artists the festival has continued to support music for fringe tastes, now located at a venue tucked into the small stage beside the classic Pori Town Theater, and known as the uLTRA mUSIC nIGHTS. Run by a French immigrant, producer Charles Gil, this program always sees a backbone of experimental and free jazz bands, both Finnish as well as a selection of foreign acts. This year the focus was more on Mediterranean sounds than earlier years' Gallic attack, but the principle of breadth of appeal here was reflected in a wide range of style and sound, as well as nationality.

For the first evening of "Tinissima and Olavi Night," Francesco Bearzatti brought the full force of Mediterranean frenzy to this sweaty theater space. Although his Tinissima Quartet is fronted by the reedist and composer Bearzatti, equally active was the frenzied trumpet and personality of Giovanni Falzone. The first of the evening's excitement was dedicated to and named after one of Bearzatti's mentors, political activist Malcom X. Both lead musicians used a full assortment of acoustic as well as occasional electronic effects to add color, but the thrust of the performance was the eyeball-to-eyeball interaction between these two 'brothers in sound.' In addition to fluid and harmonized performances, both players also attacked their instruments with flair and imagination, using both ends and all orifices of their instruments and trading as many comments, musical and spoken, between each other as well as with the audience. Bassist Danilo Gallo also used an electronic pallet, but his primary role was to support the front men with rolling, rock styled riffs over Zeno de Rossi's sensitive and inspired drumming.

As befitted a Nordic ensemble, the Olavi Quartet offered a starkly different approach to musical interaction, with sounds drawn from an equally varied source of approaches to their instruments, but with only a fraction of the frenzy that characterized the Italians. The contrast was a healthy shock to the audience's senses, now having to strain to follow and interpret the music on offer. Both Teppo Hautta-Aho and Olavi Louhivuori share a taste in the minimal as well as the minutiae of expression, starting their set with all manner of incidental (and barely perceptible) taps and scrapes on acoustic bass and drums. Jari (Olavi) Hongisto is also well-versed in the world of European avant-garde, having played in drummer Edward Vesala's Sound and Fury, and now accompanying Vesala's pianist/harpist (and then wife) Iro Haarla in her sextet. His role in this trio is as experimental as his colleagues, and by virtue of his instrument's vocal-like nature, brings the element of direct, overt humor to their set. The arrival of Juhani Aaltonen, veteran Finnish master of the jazz saxophone, brought a sharper focus to proceedings, with pieces led more from his corner and with more than a hint of melody. 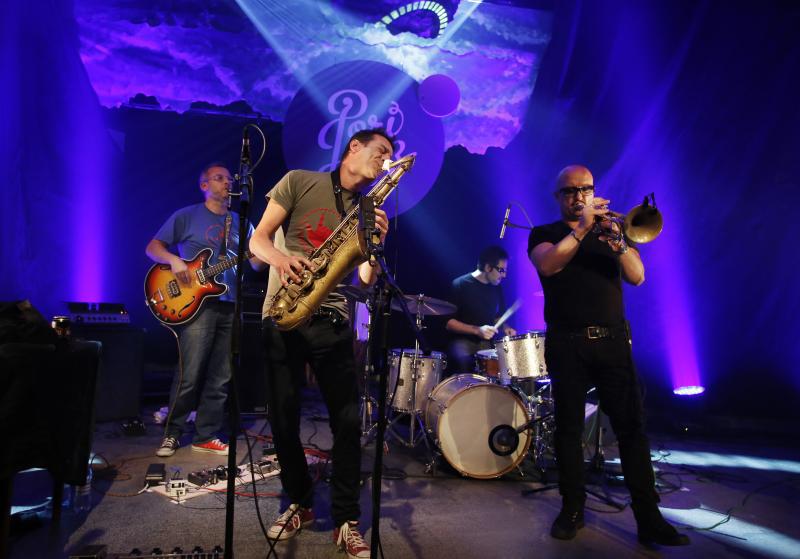 The evening closed with the return of the Italian quartet—equally enthusiastic, despite having used the intervening time for some energetic audience participation elsewhere in the festival. This second set also reflected Bearzatti's political intentions, being another full-length suite, this time dedicated to the life and political achievements of Malcolm X. Again, both front men played their hearts out, musically interweaving around each other's anthems and antics, as Bearzatti introduced a new program, entitle Monk and Roll Gallo's bass had a more prominent electronic role here, reinforcing an amusing and inspired composition which utilized Falzone's eerie and perverse vocal antics to the full. The piece includes a full range of musical references, replete with twists and surprises, and culminating on a highly optimistic note with a hectic and hilarious samba styled duet on reed and trumpet mouthpieces.

The second evening of the uLTRA nIGHTS was a more predominantly Scandinavian affair, branded as an evening for "Exploring Motors." First up was a trio whose motor force is definitely its bass department in the form of veteran Danish icon Peter Friis Nielsen. This diminutive but extraordinarily dynamic bassist has a track record of work that includes saxophonists Evan Parker, Peter Brötzmann, John Tchicai and others, and here infused the trio of compatriot and saxophonist Lars Greve and Norwegian drummer Håkon Berre with a platform for exploration. Nielsen seemed very much to be in the driving seat, hunched over his aged Fender with his fingers skittering up and down the fret board, leaving Greve to follow a more muted improvisational path. The motor of this part of the evening was undeniably detuned, even erratic, but the three lengthy musical journeys were exciting in their turns of speed as well as the variety of the musical landscape, from intense to spartan.

Second up was a far more pastoral voyage at the hands of Paolo Angeli and Takumi Fukushima. Playing a customized Sardinian guitar (incorporating three sets of strings, and an intriguing pedal-operated bass string hammer device), Angeli led the process with bow and picks, while Fukushima added touches with her conventional violin and delicate voice. Both sang in their respective native tongues (Sardinian and Japanese), as well as creating delicate audio landscapes as open and inviting as their predecessors' had been crammed and challenging. Angeli's collaborations with guitarist Pat Metheny and drummer Hamid Drake betray a musical sensitivity that is more robust, but on this night his style was matched by his partner's delicacy of approach and song.

To round off the night high octane energy was available from the hands of "Finland's freest jazz unit" and hard-working trio, Black Motor. Based in the old industrial city of Tampere, Black Motor have worked hard to get established in the country as a versatile and exciting high-powered jazz unit where each member has an equal contribution, although it is the earthy tenor sax of Sami Sippola that casts most influence over the mechanism. Blowing hard in a style compared to Sonny Rollins, as well as to both John Coltrane and Ornette Coleman, Sippola's writing forms the majority of the band's pieces. However, with five year's experience under their collective belt, both bassist Ville Rauhala and drummer and sometime flautist Simo Laihonen deserved equal applause. In fact, all three members' solos were so well-woven into the structure of their pieces that applauding them individually seemed scarcely appropriate, detracting from the synthesis of their supremely tight performance. Sippola's return to his old home town was a triumph of professional patience, having waited 11 years since his previous appearance, but was also proof of the whole band's commitment to its game, and its achievement now on an international stage.

The final evening at the uLTRA mUSIC program was another victim of oversubscription. On the bill for this final evening of "Ultra Rock Pop Brass Night" was another selection of Finnish and European bands, all capable of filling the 120 seat space on their own. First was French ensemble Journal Intime, playing brass trio interpretations of the music of Jimi Hendrix. Led by two members of France's incorrigible musical miscreants from La Campagnie des Musiques à l'Ouie—Fred Gastard on saxophones and Matthias Mahler on trombone—playing, this night, with trumpeter Laurent Bardiaux added their inspired interpretations of Hendrix's work, particularly featured on their recent album Lips on Fire (Label Ouie, 2011). Among the highlights was "All Along the Watchtower," which started like a tableau, with the trumpet and trombone out front facing one another and creating the kind of harmonics Hendrix produced with his mastery of electronic effects. 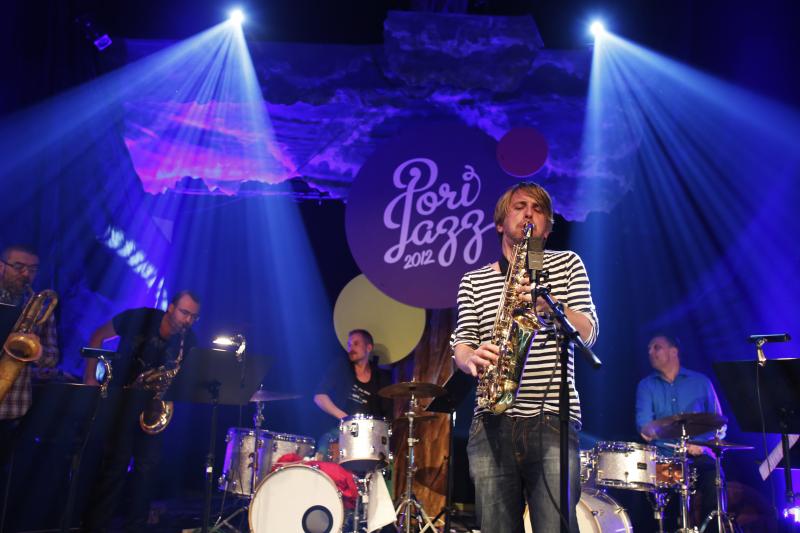 By way of contrast to these derivative acts was a band whose originality owes more than much to its Swedish-born vocalist and chief composer Anni Elif Egecioglu. Since winning the Finnish competition for the Young Nordic Jazz Comets in 2008, the group has performed in Scandinavia and Turkey to appreciative young audiences, playing what they call "jazzpop with punk attitude." Egecioglu leads most songs, nowadays sung in English, and primarily comprising rather introspective, sometimes contemplative and at other declamatory poetry. The music also ranges from intimate to explosive, with Pauli Lyytien's saxophone leading the way along with Tatu Rönkkö's solid drums and percussion. With the mix right, and Egecioglu or Lyytinen joining in on a small glockenspiel, this trio whipped up a frenzy of passion, which the singer was liable to then drop back to the audience with a twist of a lyric and a whoop of her dazzling mezzo-soprano voice.

The final band of the evening repeated the style of Gastard and company but from a Swedish angle. Inspired by rediscovering some favorite old vinyls, the late pianist Esbjorn Svensson's former colleague and drummer Peter Danemo established a band of five horns known as LED, offering a a reinterpretation of these rock standards: a set of music by Led Zeppelin. Since so much of the original is engrained in current musical memories, the mix of experimentalism and contemporary tradition felt very familiar and at the same time intriguing. Two saxophones, a trumpet, trombone and tuba gave the classic tunes an element of interplay and abandon of which guitarist Jimmy Page and singer Robert Plant would be proud.