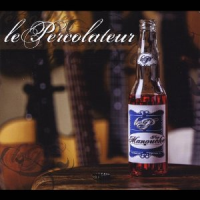 Something different and exciting is brewing on lePercolateur's Pop Manouche. This Chicago-based, Hot Club-indebted outfit finds a way to blend the sonic sensibilities of Django Reinhardt's famed band into an alt- pop/alt-folk/alt-instrumental format on their debut album, creating something unique in the process; it's as if songstress Sam Phillips, the beyond-category Pink Martini, indie folk band Hem, Reinhardt, and a few other unlikely collaborators got together to make some music.

The core instrumentation—violin, multiple guitars and bass—immediately points to the gypsy in lePercolateur's soul. Some energetic tunes with upbeat guitar accents and feisty violin work confirm this connection and fly by in fun fashion ("Bad Crazy Day"), but nothing flies too close to the gypsy jazz norm; the songs themselves and the presence of vocalist Candace Washburn, who injects a good amount of the "pop" into Pop Manouche, make sure of that. Middle Eastern-leaning music with a surfer undercurrent ("Two Weeks"), shuffling country-blues-pop hybrids ("Darling"), haunting instrumental meditations ("Oscura") and a whole lot more surface during this eleven song program.

While lePercolateur itself is a five person band, several guests stop by to beef-up the line-up and add some different flavors to the music. Three horn players—trumpeter Corey Wilkes, tenor saxophonist Shawn Maxwell and trombonist Adam Thornburg—tangle during a harmonious polyphonic solo spree on "Nothing Special," Bryan Pardo's clarinet sets the scene for "Two Weeks," which also benefits from some basic tambourine backing from Stephen Lynerd, and a third guitarist—Gabriel Datcu—drops in for a couple numbers; all parties help lePercolateur expand its aural outlook.

Pop Manouche presents a band that drinks from the Quintette du Hot Club de France's well, yet finds sustenance in other musical realms. This stylistic openness contributes to the success of the hybridized music that lePercolateur produces.

Track Listing: Bad Crazy Day; Nothing Special; Dancing In The Kitchen; All I Want Is You; Two Weeks; Goin' Out; Waiting For The End Of The World; Open Up The Door; Darling; Oscura; House.