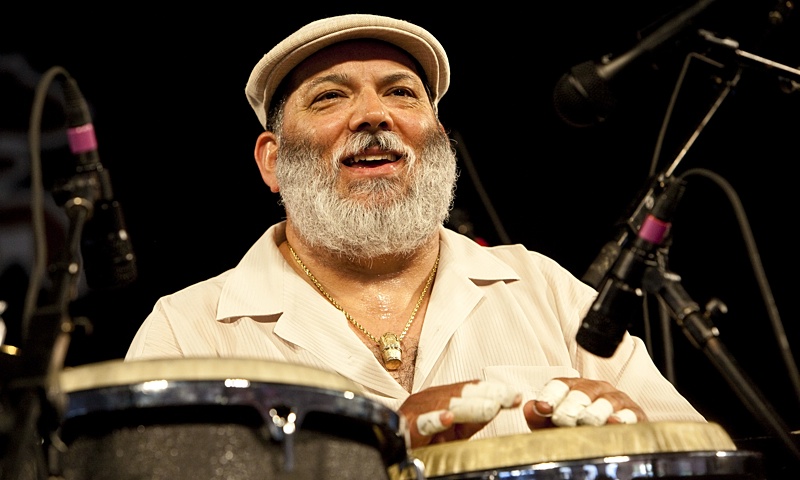 By STEVE BRYANT
August 19, 2013
Sign in to view read count
For over 30 years, conguero/bandleader Poncho Sanchez has been the premier proponent of West Coast Latin Jazz. Growing up in Norwalk, California, Sanchez was exposed to and influenced by two very different styles of music: Afro-Cuban music and bebop, as well as R&B. Originally a guitarist, Sanchez taught himself the flute, drums, and timbales before finally deciding to pursue conga playing in high school. In 1975, Sanchez's idol, vibraphonist "Bruce McKenzie invited him to perform with his band. Sanchez played with Tjader for several years until Tjader's death in 1982.

Thanks to Tjader, Sanchez signed with Concord Picante Records, where he went on to produce over 30 albums for the label, including the Grammy Award-winning Latin Soul (1999). In 2011, Sanchez collaborated with noted trumpeter Terence Blanchard on Chano Y Dizzy (2011), a tribute to Dizzy Gillespie and Chano Pozo. Sanchez is respected as one of the top American percussionists, and performs all over the world to overflow crowds.

All About Jazz: You have a very interesting history, considering you didn't receive musical training in the traditional way. What influenced you to play congas?

Poncho Sanchez: Well, I can tell you I never took any formal lessons. When I moved to Los Angeles, I started to listen to mambo records by Tito Puente, Willie Bobo, Mongo Santamaria, Machito, Ray Barretto, and of course, Cal Tjader. I especially listened to the drummers who played with Cal [Tjader] such as Armando Peraza and Francisco Aguabella. I studied them on a regular basis and I learned the conga sounds as well as the rhythms. As time went on, I learned about the different types of Afro-Cuban rhythms and I applied them to my playing.

AAJ: In addition to Afro-Cuban and Latin music, what else were you listening to at the time?

PS: Being that I lived in LA, I listened to a lot of jazz and R&B. My favorite artists included James Brown, Otis Redding and Wilson Pickett. I also listed to Johnny Otis' radio show all the time. In the jazz idiom, my favorite cats were Miles Davis, Art Blakey, Lee Morgan, and John Coltrane. I also dug the funk-jazz that Eddie Harris and Cannonball Adderley were doing at that time.

AAJ: You have been playing for over 40 years, and it seems your only gigs were Cal [Tjader] and yourself as bandleader. How was it playing with Tjader?

PS: What can I say? Cal was my friend mentor and teacher, as well as being a boss. Everything about performing in front of an audience, recording, as well as leading a band, touring and keeping the business straight, I learned it all from Cal. His Latin jazz recordings had a strong influence on me as well. Of course, my favorites were Soul Sauce, and El Sonido Nuevo, with Eddie Palmieri. The one thing, though I'll always be grateful to Cal for is hooking me up with Carl Jefferson of Concord Records—which. as you know, has been my label for over 30 years.

AAJ: Well inquiring minds want to know... How did you come to play with Tjader?

PS: I was playing around LA with some local groups, and Cal came to check me out. Next thing I know, he asked me to come play with him at the Coconut Grove on New Year's Eve of 1975. I was so nervous that I brought my instruments though the front door instead of the back. It wasn't Cal who greeted me though. His pianist, Lonnie Hewitt, was the first cat I met.

PS: He sure did! Lonnie played with Cal up until the late '70s. I remember him as being a nice beautiful cat and we remained tight up until his passing around 1979. A lot of people don't know this, but Lonnie composed some songs that were hits on the West Coast. I particularly remember "Is It Me (Or Is It My Bright Lights?)" I miss Lonnie. as well as Cal.

AAJ: Of all the recordings you did with Tjader. Do you have a favorite?

PS: Of course, that would be hard to choose, but I would say The Grace Cathedral Concert and < em>La Onda Va Bien. Roger Glenn, who is the son of Tyree Glenn, did some nice flute work on that one.

AAJ: Yeah, Roger lives in the Bay Area and doesn't receive the recognition he deserves. So, what did it feel like, jumping out there on your own?

PS: I do have to admit it was scary, especially since Cal had just passed. However, it was because of his leadership and mentoring that I had the confidence to jump on out there, and it didn't hurt that I had a label like Concord to give me a space to create and try out my music.

AAJ: You've turned out to be quite prolific. It seems that you put out about 35 records over the course of your time as a bandleader. Between your touring and performing, that's a lot of work. Do you have any favorites out of all your work? 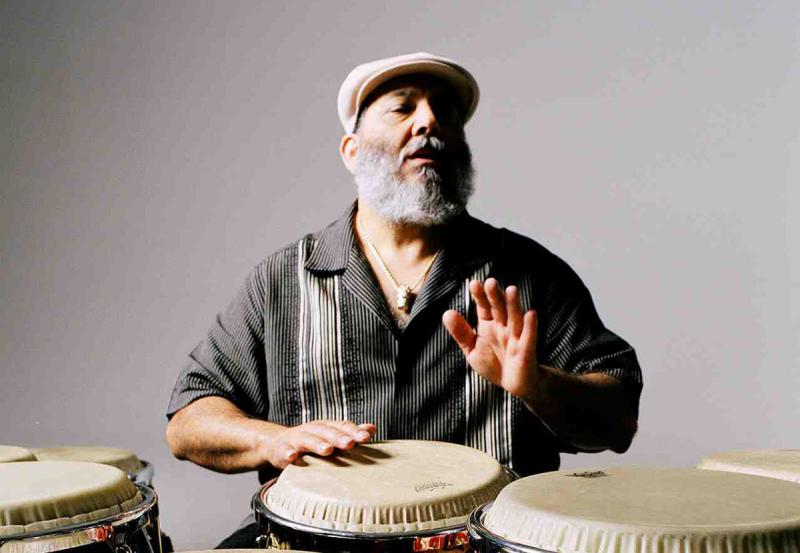 strong> PS: That's a good question. I would have to say Sonando,, my first release on Concord/Picante. Then I would definitely say Latin Soul, which won a Latin Jazz Grammy in 2000. There is Do It, which featured Hugh Masekela, and Tower of Power. Now if you ask about what I would consider memorable albums, those would be the ones where I got some big name guest stars. There is Out of Sight, where I featured none other than Ray Charles,Mongo Santamaria, Pee Wee Ellis,Fred Wesley, Billy Preston and Joey DeFrancesco on "One Mint Julep." Freedom Sound, which featured Wilton Felder and Wayne Henderson from The Crusaders, and Chile Con Soul, with Tito Puente. I also had Eddie Harris on Para Todos.

AAJ: Ray Charles; now that had to be fun!

PS: It was definitely an honor having Ray on my date. I grew up listening to him and being in the studio with someone of his stature is something I will always remember.

AAJ: Since you paid homage to Dizzy Gillespie on Chano and Dizzy, it's safe to assume that you hold him in high regard?

PS: Without a doubt. If it weren't for Dizzy teaming up with Chano Pozo, there may not been Afro-Cuban jazz as we know it today. It is a credit to the musicianship and artistry of those two great players that they were able to develop an entirely brand new musical idiom. Another individual who also deserves recognition for developing the Afro-Cuban jazz idiom is Mario Bauza. It was Mario who brought Dizzy and Chano together and, because of him, they created this great musical idiom.

AAJ: What is it about Terence Blanchard that induced you to ask him to collaborate on this project?

PS: I met Terence about 8-9 years ago, and we talked about doing something together. I always dug his style because he brings a certain fire to his playing which fits exactly the energy of Afro-Cuban jazz. Besides that Terence is a beautiful cat, and I wanted him to be the trumpeter to play to Dizzy's parts on this date.

AAJ: Maybe the fact that Blanchard is from New Orleans has something to do with that also. There was always an exchange of musical and cultural ideas between Cuba and New Orleans that dates back to Jelly Roll Morton, and I know that you have heard Louis Armstrong's version of "El Manicero (The Peanut Vendor)."

PS: Yeah, I know about that connection, and I'm sure Terence took that into account.

AAJ: Your new release, Live In Hollywood, seems to be retrospective because you've played those tunes on other dates. There is one tune, "Son Son Charari," which is a tune by the Puerto Rican bandleader Bobby Valentin. Apparently you have an affinity for those groups down there on the island.

PS: I really dig those bands like Valentin's, Rafael Cortijo,El Gran Combo and Roberta Roena and His Apollo Sound. They have a high level of musicianship and energy, plus they swing like hell. That's the type of energy I try to bring to my music.

AAJ: It seems you have done everything you wanted to do with your music. What's on your bucket list?

PS: I've always wanted to make a Latin jazz tribute to John Coltrane, and I've decided that is going to be my next studio project. I have already talked to a couple of the best contemporary tenor players in jazz, and whomever commits to the project, I will use on the date. Other than that, I plan to keep on performing touring, and spreading the Latin Jazz gospel.