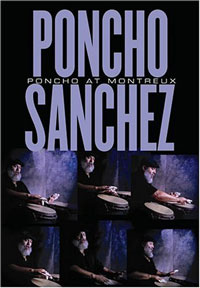 Poncho Sanchez looks great. He and his band simply don't age. They rock and swing with inexhaustible energy. Sitting at the congas leading his band, and singing from the Latin jazz tradition, he kicks off this indoor concert performance at the Montreux Jazz Festival with the same confidence and poise that has brought him from local neighborhood garage bands to worldwide acclaim. He gives his audience a superb performance every time out.

The camera pans left and right, moving up close and then backing off for full panorama shots, giving us a complete picture of the Sanchez organization in action. The leader's hands move deliriously to the rhythm of songs that honor the creative work of influential artists such as Willie Bobo, Mongo Santamaria, Cal Tjader, and James Brown. Timbales provide mesmerizing action, as the camera swings from one artist to the next. His three horn players sway cohesively to the music's rhythm as they provide a full harmonic sound.

Scott Martin turns his flute toward the piccolo range on salsa arrangements such as "Conmigo and "Guaripumpe, producing a high-wire tension that builds consistently. Similarly, high-note specialist Serafin Aguilar stretches the envelope on trumpet with a flair.

Between songs, the camera shifts elsewhere to informal conversations with Sanchez and friends, as they reminisce about the music and its driving force. Putting it all together comes quite naturally to this conguero, who's dedicated his life to Latin jazz. A brief film clip of the Cal Tjader ensemble with a youthful Sanchez sitting up front introduces "I Showed Them, a Tjader composition that represents the vibraphonist's Latin jazz sound well.

Sal Vazquez applies a strong dose of tradition on tres with "Conmigo, an Eddie Palmieri salsa tune that burns with foot-tappin' anticipation. James Brown's "Out of Sight features Sanchez as the song's emotional vocal lead. He's backed by tenor, trombone, trumpet and organ in a rollicking affair that turns the concert hall into a virtual high-rollin' nightclub for a period of time.

Watermelon Man closes the concert performance with a summary of the power that this band holds. Martin's churning alto solo and David Torres' sizzling keyboard/organ refrain create a sensation of family togetherness, as the band drives its Montreux audience into unconditional surrender.