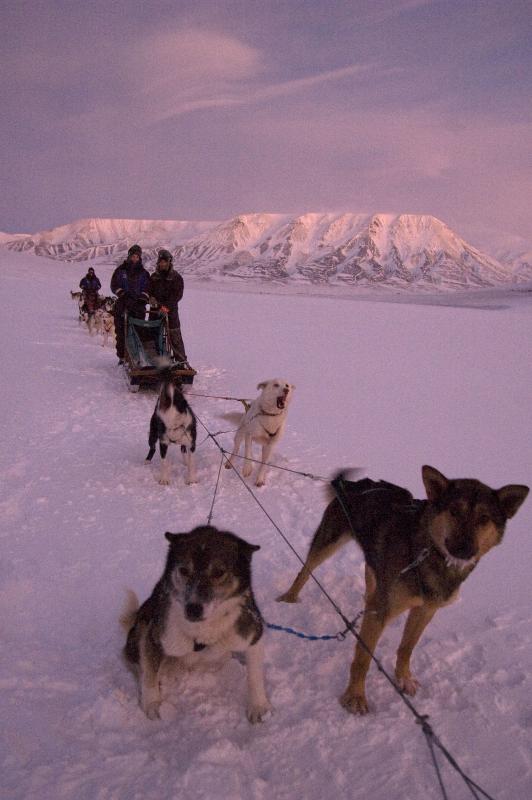 That there are no guarantees on these trips into the Arctic wilderness was made patently clear the final morning when, embarking on a dog sledding trip into the mountains, before flying out of Svalbard, the tour guides had their eight guests sign a waiver that also committed, were anything to happen, that they would listen to and follow the instructions of the guides under any and all circumstances. It hammered home that, while Svalbard has a tremendous record of safety in its outdoor pursuits, this is still the Arctic, and one never knows when a sudden storm might blow up, or any other untoward event might happen.

Still, few were thinking of these eventualities as they suited up and were taken to a dog yard outside Longyearbyen, where the few dozen dogs began to go absolutely crazy, the minute the van pulled up. Sled dogs, it seems, absolutely live to be on their sleds, and the trick is not training them to go, it's training them to stop, as these Siberian Huskies can literally go for upwards of ten hours with only the occasional short break, pulling heavy sleds with one or two people and, sometimes, cargo as well.

As with all of the Arctic trips, guests are not mere spectators, they are active participants, in this case not just driving the sleds, but going into the yard and picking up the dogs, in order, and hooking them up to the sleds. It was more than just a beautiful trip on a morning where the light was spectacular; it was an opportunity to really understand what sled dogs are about; what motivates them, and how they live their lives. The dogs love people—after all, any time they appear there's a good chance they'll get to do what they live for—but their relationship with each other is more complicated. Dogs have to be brought out to the sleds in pairs, as they are friendly with their partners, but it's necessary to keep distance from other dogs on the sled, because there are pack issues involved, and while it doesn't often happen, fights can occasionally break out.

The front dogs are the only ones who understand directions of right and left; the rest of the dogs simply follow their leaders, and driving a sled is actually relatively simple. There are only a couple of rules: one, make sure you have one foot on the sled and the other on the brake (a metal bar, with teeth that dig into the snow) at all times; two, always have at least one arm wrapped on the sled at all times; and three, don't leave the sled for anything unless it's firmly anchored to the ground. The dogs want to run, and so if the brake is released, or if you leave the sled or let go for any reason, the dogs may well head off and you'll find yourself left behind, sledless.

In contrast to the snowmobile trip a couple days back, driving a dog sled was a calming, almost meditative, experience. At rest, the dogs barked, howled, played and were clearly itching to get going; once running, they became strangely quiet, and the only sound was that of sled on snow. It was not possible to go as far as fast as with the skidoos, but it was a more organic experience, and an even better chance to appreciate the harsh grandeur of Svalbard, as the sleds headed through the mountains into a valley, only stopping briefly to make sure everyone was ok. It was a transcendent experience, and while there was no denying the cold brutality of the environment, it became easy to understand why the community on Svalbard is so close. Out there, the people you are with are all you have. When you go on a tour, it's not solitary or passive, where everything is done for you; it's an active experience, with everyone, to some extent, responsible for everyone. There was plenty of time to quietly appreciate the beauty of the Arctic, but equally, it was impossible not to engage with everyone on a more personal level; while it's certainly not true for all, there were new relationships forged on these trips, making them even more enriching and rewarding. 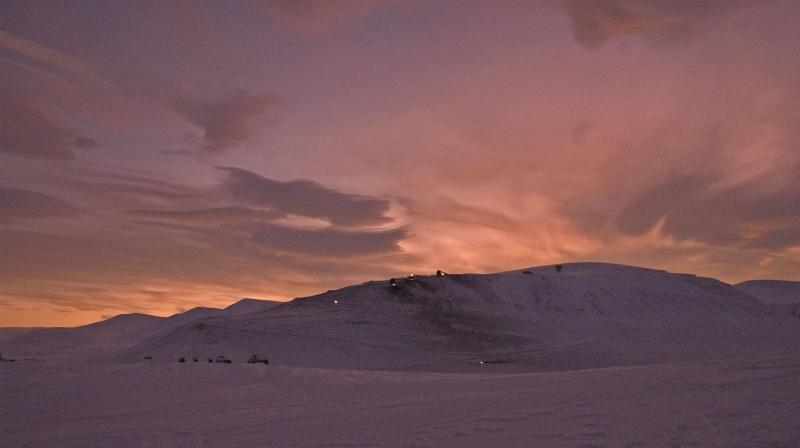 It was the perfect finish. Only four days had passed since arriving on Svalbard, but somehow—between the surreal landscapes, the unusual lighting and an internal clock completely confused by the long, long stretches of night—it felt like a much longer stay, in the best possible way. As everyone wrapped things up, and headed to the airport for what was going to be, for many, a two-day trip to get home, there was a strange, new understanding. Many, upon arriving on Svalbard, felt that they were going to have the experience of a lifetime, but few expected to actually understand why people would choose to live in such a remote place. But with only a few days' of experiences—from the compelling debut of Arctic Mood and the rest of Polar Jazz's fine performances, to trips to the mountains and ice caves, time spent with friends old and new, and an opportunity to experience, first-hand, the close-knit community of Longyearbyen—this had become a life-changing experience, and as the plane ascended from Longyearbyen airport into the Polar night, there was a new sense of longing for a place that would soon be distanced by a great many miles, but would remain permanently etched in the mind, the heart and the soul.