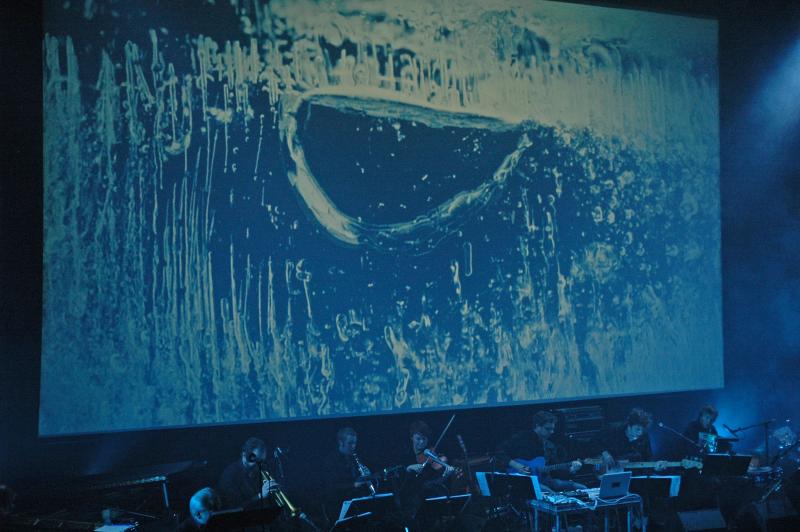 Flying into Longyearbyen is a surreal experience. It's a two-day trip from North America—one day to get to Oslo, Norway, and the second to make the final trek above the Arctic Circle to the islands of Svalbard, about halfway between the northernmost tip of mainland Norway and the North Pole, on which the town is situated. Despite flying generally west from Norway (but farther north as well), which would normally be towards the light, even at two in the afternoon it actually gets darker, as the plane approaches the islands, bordered on the east by the Barents Sea, the west by Greenland Sea, and the north by the Arctic Ocean.

And it's an odd place to go for a music festival, especially in early February, when the town is still largely in the dark, three months into a four-month Arctic winter where the sun, at best, approaches—but never actually breaks—over the horizon. At this time of year there's some light, for a few hours a day between about 10am and 2pm; but even then it's an otherworldly experience, with stunning colors ranging from a salmon pink to indigo blue creating vivid contrast against days that are largely pitch black. What better place to debut Arctic Mood, a new multimedia collaboration between musician Brynjar Rasmussen and photographer Werner Anderson, commissioned by Nordnorsk Jazzsenter (NNJS), one of four organizations (north, south, east and west) that exist in Norway to promote jazz music throughout the country...and the world. 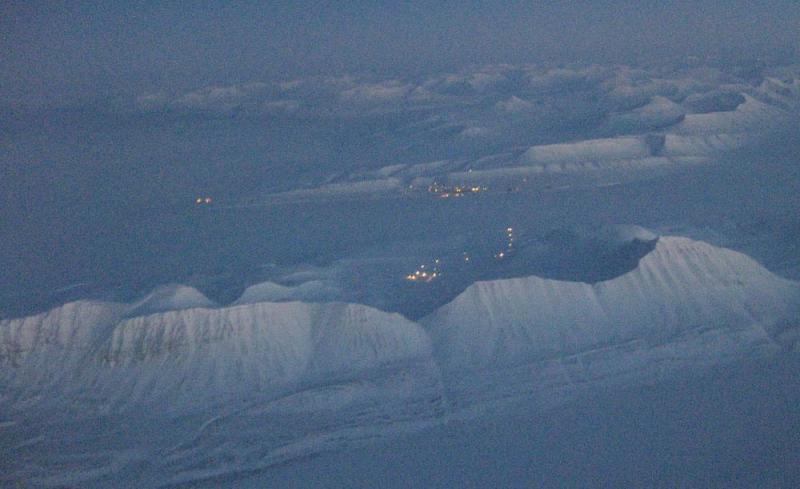 That Norway, with a population of only about five million people, has the active music scene it does—with groundbreaking artists ranging from trumpeters Nils Petter Molvaer and Arve Henriksen to guitarists Stian Westerus and Eivind Aarset—has been the subject of much coverage at All About Jazz over the past several years. But Arctic Mood presents an even more extreme view of Norwegian intrepidity: a culture that, rather than viewing obstacles as insurmountable, sees them as unique opportunities for exploration; mere problems to be solved. That Longyearbyen—a town with 2,200 inhabitants and the northernmost developed settlement in the word—would host this celebration of its own harsh and extreme, but undeniably beautiful, environment makes complete sense; that it's part of an annual winter jazz festival, Polar Jazz, is all the more special. Still: who would want to come to Svalbard in the middle of Polar Winter?

The answer: a great many. There's only one flight per day to and from Longyearbyen from Tromsø—mainland Norway's largest northern city, with 50,000 people—and it's not some small commuter jet; the SAS plane making the roughly 100-minute flight can handle about 150 people, and it's so packed that some of the journalists and associates invited to Polar Jazz 2011 for the world premiere of Arctic Mood had to stay an extra day, as the flight leaving Lobngyearbyen, the day after the festival's conclusion on February 5, 2011, was absolutely full. And the flights weren't just filled with musicians, journalists and guests of the festival, either: a mathematics professor, American by birth but living in London, England for two decades, made a weekend trip to Svalbard, to experience life in the Arctic; another couple flew up from Oslo to visit their children and grandchildren; and a twenty-something manager of Tromsø's most popular coffee shop made the trip for a week's vacation to visit a friend who's been living on Svalbard for a year-and-a-half. And that's only a few of the stories.

There's a lot to love about Longyearbyen. The town is a remarkable melting pot of people from 21 different nationalities; artificial, in that it's a constructed community, where everyone has a job—from the 2,000+ students attending the university, and the coal miners who make sure the town's power plant and its backup station are properly stoked, to maintenance workers for the town's hotels, retail folk in Longyearbyen's surprisingly varied shopping facilities and restaurants/bars, and tourism employees ready to dress guests up and take them into the surrounding mountains and ice caves by snowmobile and dog sled. Still, for all its diversity, it's a surprisingly tightly knit bunch that cites, second to the clean, beautiful locale, the strong sense of community as another big reason why they may come to Svalbard for postings of a year or two, but invariably stay much longer. Living costs are high (though salaries are commensurate), but taxes are low—half of Norway's usual income taxes, in fact, encouraging some to live in Svalbard a few years, to save some money, return to the mainland and buy a home. 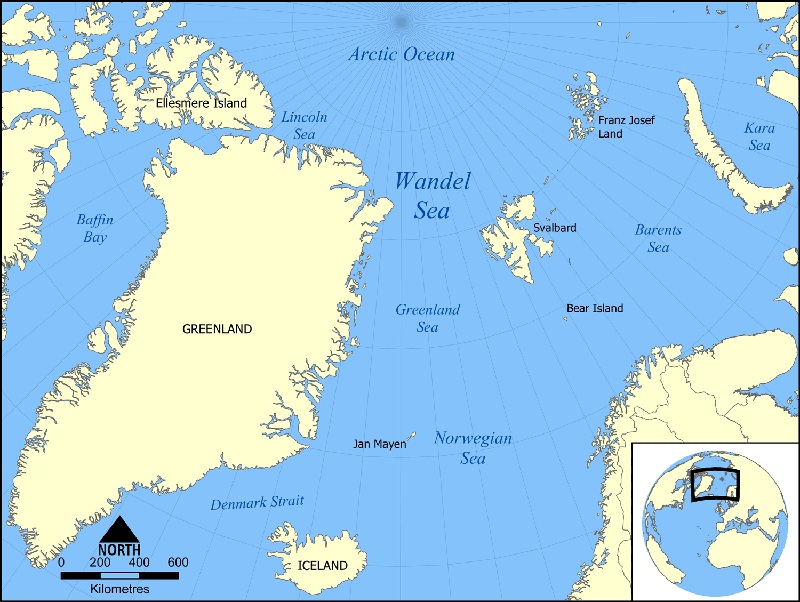 For all of Longyearbyen's high tech nature—a satellite installation exists, just out of town, as well as a world-renowned observatory, where the location provides unique opportunities for study of atmospheric conditions and outer space—there's always the feeling that you're nothing more than a guest, even if you're a permanent resident. Sure, there are paved roads and power lines, but there's no denying the extreme conditions: it's illegal to go outside at night alone without a rifle, as polar bears are part of the indigenous life of Svalbard, along with birds, Arctic foxes, reindeer and more; and students of the University Centre in Svalbard (UNIS) are required to take a week's survival training, to ensure, amongst many things (including learning how to handle a rifle), that they can survive in the wilds, should they somehow become trapped there.

More than most places in the world, people don't own Svalbard; they just live there, with an attitude towards the environment that has nothing to do with pontification and everything to do with reality. Everyone is a practical, pragmatic environmentalist; there's not a speck of dirt or litter on the streets, and there's a fundamental awareness that's all-pervasive, but everyone is also realistic. Coal—so-criticized by couch environmentalists—is the town's primary power source, but it's mined locally, with half of the 75,000 tons produced annually kept for local power, and the rest exported. For those who want to talk about solar or wind power, the harsh reality of life in the Arctic is this: there's no sun for four months of the year; and the wind is simply not consistent enough to power a town where, if both the main and secondary power plant go down, evacuation begins immediately.

Even tourism is geared towards the harsh realities of living in the Arctic, and not some soft, cushy ride. Skidoo trips to the mountains happen regardless of weather conditions, as do dog sled expeditions. "People come to Svalbard for the Arctic experience," said the tour guide to both the mountains trip and the ice caves. "Inclement weather is the Arctic experience." And participants are largely expected to be fully engaged—most learn to drive the snowmobiles and sleds, and take part in harnessing and hooking the dogs up to their sleds. 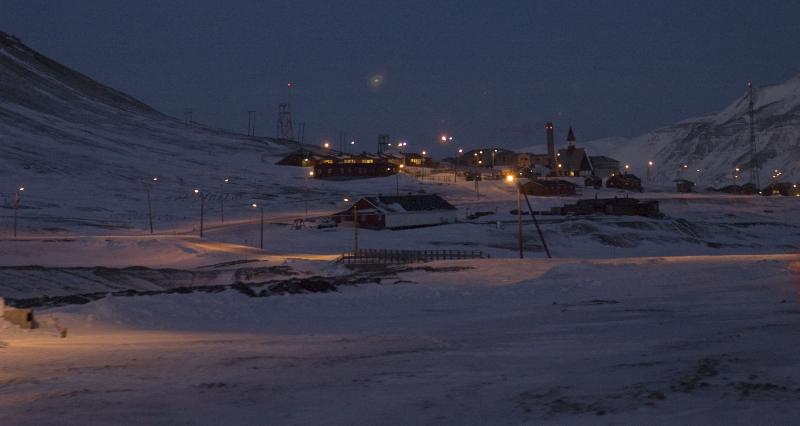 It's a stark, barren landscape, where temperatures are, thanks to the Gulf Stream, relatively temperate for the latitude. Still, it's dry, but the wind can be brutal, keeping normal winter temperatures around a balmy -15° to -20° Celsius, making proper clothing a prerequisite for all outdoor activities, with the cost of tourist trips also including any and all clothing necessary to keep everyone safe and relatively warm.

A festival largely designed for locals, Polar Jazz is far from the cutting edge; after all, with such a small population, it's not likely that there will be large scale support for things far left of center. With a program geared towards accessibility and entertainment, there was plenty to recommend, from a schedule of largely Norwegian artists ranging from the northern Manouche of guitarist Jon Larsen's Hot Club de Norvege, and the stunning traditionalism of Farmers Market multi-instrumentalist Stian Carstsensen, to the chill music of singer Beady Belle and the conceptual specificity of singer Solveig Slettahjell and her Slow Motion Orchestra.

Arriving at the Radisson Blu Hotel, and meeting up with a group of journalist and industry invitees that has, over the past several years, forged a strong bond, based on a shared fondness for the Norwegian scene—despite coming from locations as far afield as Canada, Japan, England, Ireland, Italy, Germany and Russia—there was little time to unpack before it was time to head over to Huset, a fine dining venue where a tremendous meal was served, with scallops starters and rare-cooked reindeer as the main course. As outstanding as the food and company were, however, even that opportunity to catch up with old and new friends was cut short, in order to get back to the hotel which, as the primary venue for Polar Jazz, was opening its doors for the first act of Polar Jazz 2011: Solveig Slettahjell. 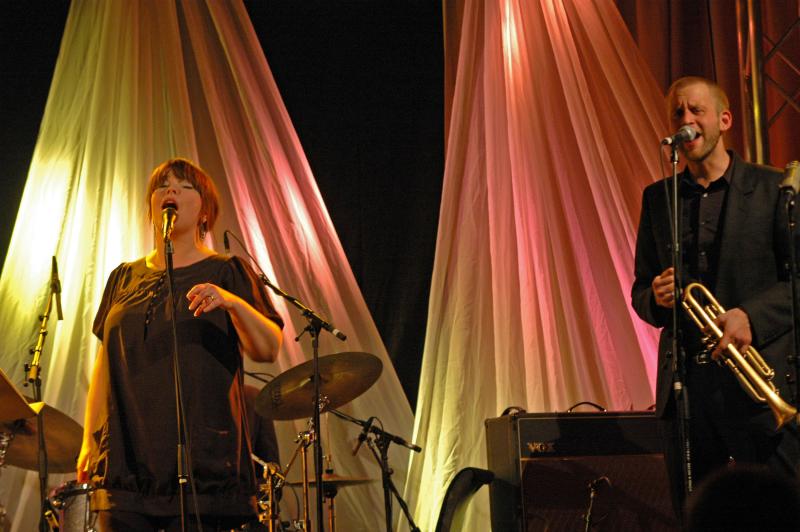 Slettahjell has been on the Norwegian scene for a decade now, since she released her first, self-titled album with her Slow Motion Orchestra in 2001, introducing a concept that has been at the heart of the singer/songwriter's music ever since. Whether it's her original material with a greater pop predilection, from recent albums like Tarpan Seasons (Universal Norway, 2010), or interpreting jazz standards on the earlier album Slow Motion Orchestra (Curling Legs, 2001), the tempos are invariably kept down. Way down.

Slettahjells' Kristiansand, Norway performance at Punkt Festival 2007 provided ample proof that power and dramaturgy needn't require the high energy and obvious nature of faster tempos. As capable of a whisper as it is a scream, Slettahjell's assured vocal instincts and dynamic control meant that songs like the cabaret-style "Precise Content," one of the highlights of her Polar Jazz performance, could evolve inexorably and inevitably, as drummer Per Oddvar Johansen—no stranger to ECM fans of The Source, pianist Christian Wallumrod and saxophonist Trygve Seim—drove the pulse to a simmering climax, with longtime trumpeter Sjur Miljeteig providing enough vocal support to allow her voice to soar.

The set was not without its problems. As fine a group as her current Slow Motion Orchestra was—in particular, keyboardist Morten Qvenild, of In The Country and Susanna and The Magical Orchestra, who layered almost subliminal synth washes and delicate, economical pianism throughout the set—compared to its 2007 Punkt performance, there were times when the group felt a little disconnected. Johansen's normally unshakable anchor sometimes got lost in the shuffle, as was also true of bassist Jo Berger Myhre. Guitarist Even Hermansen, of Bushman's Revenge, who plays with unexpected restraint on Tarpan Seasons, seemed to be searching more than finding; overplaying on a gentle tune like "Right as Rain," which works on the album because of the very sparsity of the accompaniment and a slow, inexorable build. And in a country of forward-thinking trumpeters like Mathias Eick, Arve Henriksen, Nils Petter Molvær and Per Jorgensen, Miljeteig came off as merely competent. 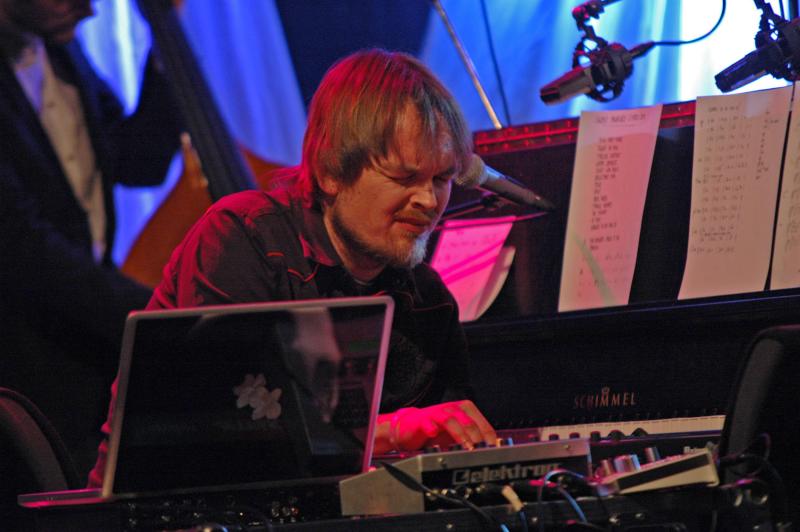 Still, as flawed as Slow Motion Orchestra's set became at times—clearly an anomaly in the singer's unfolding career—Slettahjell's Polar Jazz 2011 performance succeeded on enough fronts—carried, as it was, by her evocative voice and Qvenild's ever-tasteful work.