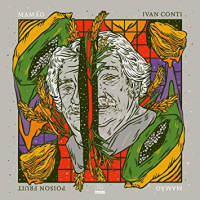 If the music on his fourth solo album Poison Fruit is a true indicator, Ivan "Mamão" Conti hasn't lost his uncanny producer's ear or instrumentalist's touch for clubbers or dancers in Brazil. A legendary bandleader, percussion and drum player, and composer, Mamão sweetens Poison Fruit by letting it ripen in the hands of two younger, next generation translators / ambassadors: Mamão's son Thiago Maranhão, who oversaw this set's five bonus remixes; and keyboardist Daniel Maunick, son of Jean-Paul "Bluey" Maunick of Incognito (and a/k/a hip-hop impresario "Dokta Venom"), who co-produced the original tracks.

While there's a lot of complexity in this music, most tunes feature Mamão, a founding member of the "samba doido" ("crazy samba") space-age Brazilian jazz ensemble Azymuth, with only two or three musicians, mainly keyboardists Maunick and Fernando Moraes and/or full-time Azymuth bassist Alex Maheiros. The show-stopping "Bacurau," DIY electronic jungle music with percussion and electronic melodies that dig so deeply into the dance music of Brazil that they come out the other side into the dance music of Africa, features only Mamão and no one else at all. This groove flows strong and warm, not brittle and clattering like so much other electronic dance music, and makes me picture Conti quietly setting up all these different melody and rhythm machines and then allowing himself one small quiet smile as his music sort of rolls on its own. "Tempestades," Conti's other solo piece, features his masterful drumming.

The title track reflects and refracts 1970s American disco and subsequent Eurodisco music in sparkling detail. Bass drum thumps out its metronomic disco beat like a soft but insistent pulse, occasionally triggering a small waterfall of cascading notes, while Mamão pours out long, cool draughts of synthesizers and keyboards on top like a summer shandy. "Ecos Da Mata," which teams Mamão with Maunick, seems to capture the sound inside Sun Ra's mind as he crosses a Brazilian disco dancefloor—a different wrapper, a different flavor, but the same sweet candy.

In other slices of his Poison Fruit, such as "Jemburi" and "Encontro," Mamão extends the art of Brazilian jazz with electronics explored by George Duke and other early practitioners—very modern music in the way it uses digital technology, yet the purpose it serves remains soulful and real and genuine.