The Pete BarenBregge: Point of Grace 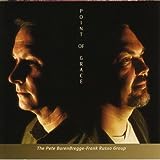 A certain "sound" has been associated with respective jazz record labels since the 1940s. Blue Note had the "Blue Note" sound in the 1950s and ‘60s. Contemporary and Pacific Jazz had that "West Coast Sound." Other than Manfred Eicher’s ECM imprint, no other contemporary label has developed one like Tempe, Arizona’s Summit Records. Summit has come to be known for a crisp yet fluid sound characterized by the Watters Brothers, Tony Monaco, the Mike Vax Big Band, and The Pete BarenBregge—Frank Russo Group. It is this last group that made me think of the "Summit Sound."

is the followup to 2001’s well-received PF Flyer. It is drenched with Pete BarenBregge’s mammoth saxophone sound, whether soprano or tenor, and driven by Frank Russo’s powerful, relentless rhythm. The opener, guitarist Rob Levit’s "Ornettin’," gives the listener a pretty good idea what to expect from the recording. Sinewy and lean, the lead lines follow serpentine and complex paths. The groove is infectious, particularly when the band switches to 4/4. The title track follows, picking up where the opener left off. "My Shining Hour" has an easy swing with BarenBregge expounding on tenor and Fred Hughes taking an extended piano break. Hughes donates several originals to the recording, including the lovely morning calm and the smooth gospel "New Day Dawning." The latter picks up where the Crusaders left off with Scratch and brings musical sanctification into the 21st century. BarenBregge wails on alto over the jaunt of Hughes’ double-fisted piano.

The disc closes with another Summit Records trademark—the unlikely cover. Joni Mitchell’s "Woodstock" receives a guitar-based retro treatment with BarenBregge again on tenor. The effect is dreamlike and very effective. "Woodstock" closes what is certainly one of the best saxophone dates released this year.