By ELLIOTT SIMON
August 4, 2009
Sign in to view read count 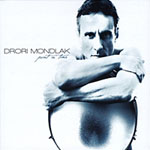 Good drummers always seem to make all the right connections and Point In Time indicates that leader Drori Mondlak is, indeed, very well connected. He has brought together three marvelous instrumentalists and leaders in their own right—altoist/flutist Karolina Strassmayer, guitarist Cary DeNigris and bassist Steve LaSpina—for an intriguing quartet that strikes a perfect balance between the power in Strassmayer's horn and the elegance of DeNigris' chords, buoyed by the relaxed feel effected by his and LaSpina's obvious affinity.

Strassmayer has rightly become known for her ability to swing and bop in commanding ways. But here we are also treated to a beautiful lyricism driven by DeNigris' extraordinary chordal mastery. This makes for a surprisingly mellow program whose opener, "Sweet Tooth," features an engagingly restrained drum solo. On the version of Frank Foster's "Simone" that follows, LaSpina and Strassmayer combine for a gorgeous intro.

DeNigris' compositional skills are on display for four of the eight tunes. His "Brenna's Morning" is a wonderfully delicate piece, coupling lacelike chords with Strassmayer's emotive flute and LaSpina's touching arco. Though Strassmayer and DeNigris spit fire during the session's bluesier and boppier moments, more appealing is their conversational rapport on the intricate "No Name Blues" and delightfully melancholy ballad "Without a View" or that of Mondlak and DeNigris on the funky closer "The Prance." Flawlessly engineered and mastered, the intimate interconnections of this exquisite Point In Time are expertly captured.

Sweet Tooth; Simone; Brenna's Morning; No Name Blues; It Once Was A Waltz; Without A View; I've Paid Some Blues; The Prance.