By BRUCE LINDSAY
December 2, 2014
Sign in to view read count 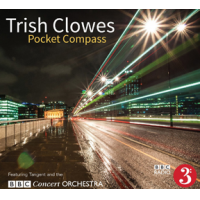 On her debut album, Tangent (Basho Records, 2010), saxophonist Trish Clowes gathered together a large group of musicians and included a full orchestra on two tracks. For her impressive second album, And In The Night-time She Is There (Basho Records, 2012), she streamlined the line-up, adding just half a dozen guests to the core quintet but ensuring that the string players had the talent and opportunity to improvise. Pocket Compass is built once again around Clowes and her core group, augmented on three tunes by the addition of the BBC Concert Orchestra.

In her sleeve notes, Clowes writes that getting the orchestra to improvise on each tune was her "first priority." Orchestral improvisation is most obvious on "Radiation," during a relatively brief later section which she calls a "free up." The lively "Balloon" features Lauren Weavers on oboe. "Chorale" is calm and graceful, Clowes' tenor saxophone weaving smoothly around the strings, Gwilym Simcock's elegant comping adding depth to the sound. It's the most engaging of the BBC Concert Orchestra pieces—although a brief piano coda, lasting barely 10 seconds, sounds like an afterthought.

The remaining tunes are quintet numbers. Clowes is joined by four players—Simcock, guitarist Chris Montague, bassist Calum Gourlay and drummer James Maddren—who've been with her since Tangent.

"Question Mark" begins with a slow and mysterious passage then moves into a more up-tempo and straight-ahead feel, focussing firstly on soprano sax and then piano. "Porcupine" finds Clowes' tenor, Simcock's piano and Chris Montague's guitar in suitably spiky mood. The most striking feature of "Symphony In Yellow" (inspired by Oscar Wilde's poem of the same name) is Montague's lovely guitar solo—sounding like a lap steel, its delicate yet precise lines mix mystery and romance. "Pfeiffer And The Whales" centers on Clowes' mournful tenor sax, a lonely voice in a vast ocean. "Wayne's Waltz" is inspired by Wayne Shorter, who Clowes visited in California. Clowes plays soprano sax, her emphatic playing echoed by the other four musicians.

While the overall feel of this album is rather restrained, Pocket Compass is well written and performed, with moments of great beauty. Three albums into her career, Clowes has become a skilled musician and a composer who can write for ensembles large and small.