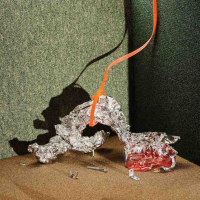 Tim Parkinson has been composing since 1994 and has a discography including a couple of highly-regarded Wandelweiser albums featuring two piano pieces from 2006 and 2007, played by Philip Thomas , and a twelve-part cello piece from 2004, played by Stefan Thut. But the LP Pleasure Island is said by the recording company Slip to be "his only piece conceived of first and foremost as an album." The rationale seems to be that Parkinson is primarily a composer and a performer rather than a recording artist, which helps explain why Slip refers to this album as a "piece" when it actually consists of seven recorded pieces. Although Pleasure Island doesn't immediately feel like a concept album, its tracks contain much detail which reveals that they have enough in common to make it a coherent whole with a consistent soundscape and an overarching world view, albeit a less than optimistic one. Recorded in London from October to December 2017, and in Newcastle in May 2018, the tracks feature Parkinson alone on a range of instruments and electronic equipment. His is also one of five voices heard on the album, providing a human thread running through it. (Check out the YouTube below, for a taste.) From the start of the opening track, "Beginning Middle End," listeners are bombarded by overlaid voices hurriedly gabbling lyrics from Parkinson's adaptation of Nicola Porpora's notoriously convoluted 1708 opera "L'Agrippa," over a sustained low-frequency drone. Those lyrics are reproduced on the album sleeve, but they prove as opaque as the opera itself; more importantly, for the last five of the track's seven minutes the voices are joined by rhythmic drumming that drowns them out to the extent that they end up wordlessly singing along with the drums, creating a pleasingly listenable passage, which is followed by a restrained coda of drumstick sounds. Together, the next two tracks, "Human Words Machine Lesson" and "Leave a Message," reinforce the sense that the voices are vulnerable, menaced and dominated by the chilly impersonal electronic sounds; the tracks' common theme is the alienating effect of leaving or receiving telephone messages. Tellingly, in the album's printed lyrics, the word that occurs most often, and far more than is usual, is "robot." All of which makes the last minute of "Human Words Machine Lesson" remarkable, consisting as it does of a clear, unadulterated field recording of birdsong. What could be less robotic, more natural than that? Given the above, Pleasure Island may seem too cosy a title for this album. In fact, it is borrowed from Disney's Pinocchio and describes a manic amusement park where young boys run amok, leading to Pinocchio's conclusion, "Being bad's a lot of fun, ain't it?" The come-uppance is that the boys end up being turned into donkeys and sold into slavery, a fate Pinocchio narrowly escapes. Parkinson clearly has a well-developed sense of irony! Notwithstanding that, for his first "proper" album he has produced a richly-detailed and enthralling record which keeps on giving the more it is played. More soon, please, Tim.