By JACK BOWERS
November 1, 1999
Sign in to view read count 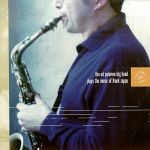 Frank Zappa’s now batting .500. I’d heard one other big–band tribute to Zappa’s music (by an ensemble that will remain nameless) and was thoroughly unimpressed. But the second time’s a charm — and a charmer as well.

What’s the difference? It has to be the fabulous charts by bandleader / alto saxophonist Ed Palermo who’s long been an admirer of Zappa and manages to bring out the best in his labyrinthine and often quirky compositions. What’s more, he makes sure they swing, not an easy task when one is dealing with music written for another genre, in this case rock. When one is planning a tribute, it’s usually more successful when he thinks highly of the honoree, and Palermo makes no secret of his respect for Zappa who was always on the cutting edge of whatever was happening in the world of pop / rock music. About the nicest thing one can say about the eleven selections on this dashing and colorful album is that they sound as though they were actually written for a contemporary big band such as Palermo’s (one of them, Palermo’s “wai’fn?,” actually was).

And what a remarkable band this is, generously stocked with some of New York’s finest musicians and enhanced on a number of tracks by guests Bob Mintzer or Chris Potter (tenor sax), Mike Keneally or Mike Stern (electric guitar) and vibraphonist Dave Samuels. Mintzer is featured on the appropriately named “King Kong” (that’s close to what his tenor sounds like), Potter on “Waka / Jawaka,” Samuels on “Twenty Small Cigars,” Keneally on “Aybe Sea,” Stern on “The Little House I Used to Live In” and “Who Are the Brain Police? / Holiday in Berlin.” Palermo has his say too, soloing crisply on alto (“Toads of the Short Forest,” “Sofa #1, “wai’fn?”) and joining Keneally and Stern to make up a splendid guitar trio on “We Are Not Alone.” Mintzer also solos on “Toads,” Samuels on “Sofa #1,” pianist Bob Quaranta on “wai’fn?,” alto Cliff Lyons (with Keneally) on “Peaches en Regalia,” while Ted Kooshian is heard on guitar (“Toads”) and harpsichord (“wai’fn?”).

High marks for Palermo’s sure–handed rhythm section, anchored by drummer Ray Marchica, which wrestles Zappa’s brawny compositions to the ground and bars them from breaking free, and for the other sections as well (presided over by lead trumpeter Liesl Whitaker) who are always on top of their game. As Palermo notes in thanking them, “Folks, this Zappa stuff ain’t easy, and my band mastered all of it.” There’s no doubt about that, Ed — and your engaging enterprise has caused at least one listener to reconsider his opinion of Zappa’s music. Perhaps others may do the same.

Peaches en Regalia; Toads of the Short Forest; Who Are the Brain Police?/Holiday in Berlin (excerpt); Twenty Small Cigars; King Kong; Aybe Sea; Waka/Jawaka; Sofa #1; The Little House I Use to Live In; We Are Not Alone; wai'fn?