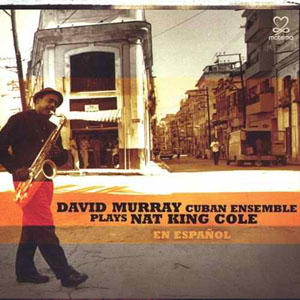 Latin music has culturally been intended for dancing and romancing. Any Latin singer or orchestra worth a cover charge has known this, and David Murray the innovative saxophonist absorbing the role of conductor/arranger on Plays Nat King Cole En Español, demonstrates this concept perfectly.

In taking on a project that updates the recordings Nat King Cole did in Spanish and Portuguese in 1958 and 1962, Murray maintains the genuine savor of the original compositions, while broadening them to assimilate contemporary improvisation.

The crowded dance floors during the golden age of the mambo and cha cha in such legendary clubs as Havana, Cuba's Tropicana or New York City's Palladium come instantly to mind with the opening "El Bodeguero," and that's just the beginning.

The repertoire is perfectly poised from up-tempo numbers to simmering ballads, which are required for the legitimate ethnic experience. Daniel Melingo, a raspy voiced Argentine, is the vocalist on the traditional bolero "Quizás, Quizás, Quizás," and the tangos "A Media Luz" and "El Choclo." Melingo delivers with a sincerity the amorous predicaments demand. "Tres Palabras," an instrumental bolero, is given a bluesy intro by trumpeter Mario Felix Hernandez Morejon, setting up the saxophones which follow.

The enduring Puerto Rican standard "Piel Canela," Mexico's "Cachito," and the song written specifically for Cole, "Aqui Se Habla En Amor," are perfect showcases for Murray to display his virtuosity and domination of this complex genre. Kudos all around for the musicianship of the selected soloists, obviously inspired by Murray, who clearly leads by example.

Murray handpicked his Cuban musicians, which he recorded with in Argentina, and recorded the Sinfonieta of Sines in Portugal, for the string orchestrations, thus emulating the vintage Latin big bands of yesteryear compounded with the lush string arranging of the crooner era. Plays Nat King Cole En Español, is wonderful music intended for dancing and romancing.