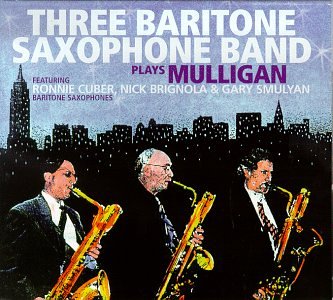 Three of today's top baritone saxophone players bring their own interpretations and their own "tool sets" to this session which pays tribute to the legendary Gerry Mulligan. Adding bass and drums, the trio combines three-part harmony with expressive solos by each member of the quintet. As leader, Ronnie Cuber takes the top melodic line much of the time, and punctuates the ensemble's phrases with deep staccato notes and brief embellished gestures. Nick Brignola fills the middle harmony role, and lends his well-developed technique for solo passages. Gary Smulyan covers the bottom of the harmonic structure with applicable support. All three saxophonists have worked with bands associated with Charles Mingus, other big bands, and as leaders. As with the human voice, each has his own recognizable tone and articulation: Cuber shows clarity with soulful blues-based expression; Brignola maintains an immaculate articulation and explores the full range of the instrument; Smulyan combines a somewhat raspy tone with powerful phrases that remain, for the most part, at the lower end of the instrument's audible spectrum. Like baritone saxophonist Mulligan, the trio plays it cool and with comfort.

With walking bass and brushes, "I Want To Live" offers a street-walking mood like that often seen in movies, where the starring character, wearing a trenchcoat and hat, lights up a cigarette and goes for an urban stroll, giving himself time to think over the story's plot. From the film of the same name, the piece is a feature for the expressive solo work of Ronnie Cuber. "Black Nightgown," from the same film and with a similar mood, is a feature piece for Nick Brignola. He is featured again on Mulligan's warm bossa "Theme For Jobim," which is performed cooly with appropriate rhythmic accompaniment from acoustic bassist Andy McKee and drummer Joe Farnsworth. Both McKee and Farnsworth provide solo jaunts, fours, and capable support for the baritone saxophone trio. Mulligan's relaxed "Walkin' Shoes" features Brignola and Smulyan trading choruses; "Lonesome Boulevard" and "Bernie's Tune" include solos from each of the saxophonists; and Cuber's composition "Waltz For Geraldus" rounds out the session with power and charm. One of the session's highlights is Mulligan's up-tempo "Five Brothers," which offers Smulyan's hottest solo, Brignola's contrasting rapid-fire answer, and Cuber's expressive follow-up. Recommended.

About The Three Baritone Saxophone Band