Robocobra Quartet: Plays Hard To Get

By IAN PATTERSON
January 13, 2019
Sign in to view read count 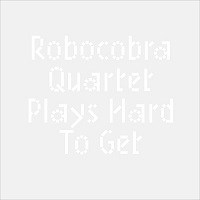 In this post-genre era it can be quite a challenge at times to name music. Not that it should matter, but when it comes time to filing music away it seems that only alphabetically makes sense anymore. This is certainly advisable with Belfast band Robocobra Quartet, whose blend of post-punk, hardcore, jazz and contemporary classical will likely induce a spot of head-scratching, once the adrenaline has subsided. "It's a strange world we stepped in...", intones Chris Ryan at a certain juncture, which could almost serve as a useful caveat for those about to enter Robocobra Quartet's sonic universe.

Formed in Belfast's cutting edge Sonic Arts Research Centre by singer/drummer Ryan, shape-shifting collective Robocobra Quartet's debut, Music For All Occasions (Self-Produced, 2016), was hailed by the Irish music press as one of the most adventurous recordings to come out of the island in years. This follow-up builds on those avant-garde foundations. When vocalist /drummer Ryan's spoken-sung delivery explodes into shouting on "Try Hard," or when electric bass rips and snarls on "I Shouldn't Have Watched The Film What Lies Beneath (When I Was Twelve)," there are shades of The Stooges at their rawest and most primal. When the saxophones of Paul O'Reilly, Thibault Barillon and Tom Tabori fuse fiercely on "Bar 37 Will Shock You," the music veers into heady, free-jazz territory.

The compositions, however, are too artfully crafted, and Ryan's lyrics too poetic for this to be punk or free-jazz. His ruminations on time and being on "Short Stretch of Day," "do you see the speed of the recent movement of time?...we float around getting used to things", or in response to someone's suicide attempt on "You'll Wade," "we'll find a kinder use for that unused noose" are closer in naked spirit to David Byrne than Iggy Pop. Factor in a string quartet, a choral interlude, the juxtaposition of mellifluous saxophone and industrial noise, shimmering electronics, a fat back beat that comes and goes without warning, lyrics in turn obscure, tender and acutely observant of the minutiae of everyday existence, and the superfluous business of music labels goes hurtling out the window.

Such seemingly quixotic ingredients probably shouldn't gel, but they do, and remarkably convincingly at that. These mostly short numbers—only three tracks stretch beyond four minutes—are uncluttered, punchy and oddly infectious, both musically and lyrically; "I'm approximately three times the person I was then but I'm twice as unsure", Ryan states on "Pinballs," a searingly honest confessional about human frailties. Even when briefly contemplating the end of the earth on "Blue Sky Sinking" it's hard to resist Robocobra Quartet's upbeat rhythms. Or the extremes on the longest track, "Ah," which lifts off gently with harmonious, interweaving saxophone lines only to burn up with screaming vocals at the death.

Short Stretch of Day; You’ll Wade; Try Hard; Pinballs; Bar 37 Will Shock You!; I Shouldn’t Have Watched the Film What Lies Beneath (When I Was Twelve); Blue Sky Sinking; Least Violent Time; Ah.