Misha Tsiganov: Playing With The Wind 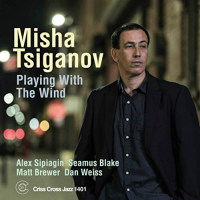 Pianist Misha Tsiganov seems to further his creative reach with each date he delivers. While calculation and supreme specificity with the pen always help to keep things grounded in his music, the level of daring in Tsiganov's compositions and the high degree of spontaneity he brings to the fore through his piano help to continually push things one step beyond.

With The Artistry Of The Standard (Criss Cross, 2014), Tsiganov elevated the act of interpretation and demonstrated pointed arranging savvy with the A-list combination of trumpeter Alex Sipiagin, saxophonist Seamus Blake, bassist Boris Kozlov, and drummer Donald Edwards at his disposal. Then he split the playlist on Spring Feelings (Criss Cross, 2016), both molding standards to his liking and putting original work on display with the same lineup, save for Hans Glawischnig subbing in on bass. The programming formula for this, Tsiganov's third go-round on the venerable Criss Cross label, hews close to that of its predecessor, with four originals, four classics, and one Russian folk song in the mix. But a growing complexity in his writing and a notable rhythm change-up, with bassist Matt Brewer and drummer Dan Weiss taking the reins, shifts this music into a different realm.

Opening on the title track, Tsiganov sounds and signals change in many a turn and phrase. Balancing tension and flow, and mixing meters and grooves, he sets the rhythm section on a roller-coaster ride. But math music this isn't. Despite a high level of sophistication, shifting time signatures, and tight turns in the form, the song maintains a dancing grace. Chalk it up to the rhythm section's comfort in complexity and the post-modern lyricism endemic to the Blake-Sipiagin front line, both of which help to place this album in an incredibly positive light. A second original—"Mama"—immediately follows, framing Tsiganov's love for the family matriarch in five.

As on his two previous albums, the pianist professes his admiration for Wayne Shorter's music through a pair of tributes. Of course, Tsiganov's takes are anything but plain Wayne. "Witch Hunt," coming early in the program, is reborn in fourteen. There's tremendous passion, along with a hypnotic lift, in the prescribed jostling of the arrangement. Later on, a patient "Virgo" speaks to a vision built on reharmonization, odd-metered stability, and segmented soloing on the form. Each of those pieces speak completely on their own terms, but both touch on Shorter's own beliefs about a song's perpetual developmental cycle.

Though much of Tsiganov's music here centers in on a type of intellectual stimulation based around architectural design, the heart has its way in more than a few spaces. An ever-so-brief "Dream Catcher" centerpiece allows his piano to drift off toward beauty all by its lonesome and "The Very Thought Of You," which closes out the program, dresses up the familiar in elegant fashion. These five men may be able dissect music into the most difficult of dimensions, but they can also melt the heart.

Playing With The Wind; Mama; Witch Hunt; Orange Dream; Dram Catcher; Cry Me A River; Virgo; To Ne Veter Vetku Klonit (No, It's Not A Branch Bowing To The Wind); The Very Thought Of You.