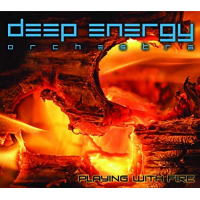 Playing with Fire sort of hovers over and moves between two camps—progressive rock and progressive raga—of progressive jazz. Its gemstone is "Resolve/Improv/Caravan," a twenty-minute journey through outer and inner space that spans an encyclopedia of styles and sounds: Everett's bass stomps and glides behind the strings' snakecharming melody, then steps out front to continue oscillating between mellow and raging, and later recites a floating tone poem; Selvaganish at first plays but then breaks into vocalizing his tabla part; Gunn sears your ears with his closing solo; and all this comes together, drifts apart, and comes back together under the canopy of classical violin.

I'm not familiar with every stage of their fifty-year career but several floating moments on Playing with Fire sound and feel like King Crimson, such as the lead and ensemble strings worshipfully singing of "The Return"; and Gunn's buzzing guitar bending "Mysterious World" from Western to Eastern sound, strongly echoing Lark's Tongues in Aspic (1973, Island/Atlantic). In addition, Gunn beautifully weaves two acoustic guitar verses of "Amazing Grace" into the closing "Honor."