By DOUGLAS PAYNE
January 1, 1998
Sign in to view read count 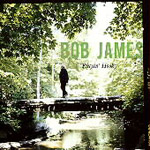 One can only hope that this title is a reference to a leave of absence from the dreadful Fourplay. Bob James does what he does best (and worst) on Playin' Hooky. There's good stuff here like the Bach-to-the-fusion of "Playing With Fire" (featuring Dave Samuels on vibes and Fareed Haque on guitar), nice acoustic piano work on two exceptionally good numbers ("Organza" and "Glass Hearts") and the Fender Rhodes maestro's return to the electric instrument on three undercooked pieces ("Mind Games," "Do It Again" and Love Is Where").

Playin' Hooky isn't as inventive or memorable as James' old Tappan Zee records of the seventies. But when he's not playin' hokey, Playin' Hooky makes for occasionally nice listening.