An eclectic group of stars—Roy Hargrove, Dianne Reeves, Keb' Mo,' James Carter, Poncho Sanchez, Herbie Hancock—brightly shone during the recent Playboy Jazz Cruise on Holland America's Westerdam, out of Fort Lauderdale into the Caribbean. But it was host Marcus Miller who made the voyage an unqualified success—not only for his ingenious music but for the way he kept things running smoothly, seemingly always there for fans and fellow musicians.

During the cruise, there were jazz events at all times—headliner concerts nightly, 6:30 and 9 p.m., in the large Vista Lounge; later, shows in the Queen's Lounge theater and the intimate Ocean Bar. And jam sessions and party times around the pool on Lido Deck until after midnight.

Best of all, there were plenty opportunities to hear a favorite performer in multiple appearances. During mornings and afternoons, there were presentations on jazz history, Q & A sessions with musicians and Wine Hours, celebrating artist's latest CDs. Of course, cruising is for relaxing and, be assured, there was plenty of that on board and during port stops.

James Moody and Eldar got the cruise underway in a double bill, featuring the legendary veteran and one of jazz's young comers. At 80, Moody still shows the presence on tenor sax that made him a major factor in his long career. Making up his peerless quartet were Renee Rosnes on piano, a top-biller herself, the always smiling, unflappable bassist Matt Coolman and the intense, constantly pushing Adam Nussbaum on drums. Moody played classic standards, such as Benny Golson's "Stable Mates," along with contributing humorous vocals, on the immortal "Moody's Mood For Love" (based on a 1949 recorded Moody solo of "I'm in the Mood for Love") and the clever parody, "Benny's From Heaven." The crowd was pleased.

For his part, dynamic pianist Eldar displayed jaw-dropping technique as he creatively shaped favorites—a languidly beautiful rendition of "Besame Mucho" and a fast and furious take on Oscar Peterson's "Place St. Pierre." On the latter, he displayed a compendium of styles—from bop to stride. Midway in the set, Eldar introduced a selection of originals just recorded with his trio for upcoming release. On these, Armando Gola put down his up-right and picked up an electric bass, while Eldar went back and forth among keyboards, playing off one against the other, exploring new territory with dynamic drummer Ludwig Alonso as compass. A few mainstreamers walked out, but for most, it was a stimulating set, indeed.

Dianne Reeves' show emphasized her debt to Sarah Vaughan. In a tribute, she acknowledged: "My voice came through her." Reeves' rich, lush style was heard in songs from the delightful "A Social Call" to the dazzling "Windmills of My Mind" and on her warm interpretation of "Misty." Fans could see her throughout the week at an autograph session, a CD release party, an interview in the Vista and singing at Saturday morning's gospel show. She said this was her first jazz cruise, and she was loving it.

James Carter, carrying an armful of instruments on stage, proved his virtuoso status on woodwinds. With an organ trio, he began on soprano sax with an exciting, fast-paced version of Oscar Pettiford's "Tricrotism." He then transitioned to other winds, leading to a haunting flute solo on a jazz classic, "DoDo's Bounce." At the end his "Bossa J. C." had the audience up and shouting. He was greatly aided by Gerry Gibbs on organ and keyboards, always upping the ante. On synthesizer, Gibbs even sang along with himself a la Manhattan Transfer. Carter's jam appearances provided two of the cruises's most memorable moments. In the Ocean Bar he created a traffic jam as he played all-out on soprano. The sound carried throughout the floor and passers-by stopped to hear—clogging the halls. In another jam, Carter brought on two young sax players from the Miller band, Keith Anderson and Alex Hahn, and their admiration showed as they traded bars with their hero.

Poncho Sanchez, as usual, brought on a party atmosphere and soon had much of the audience dancing in the aisles. He began, however, showing his jazz chops, with the softly swinging "Night Walk," but soon warmed up the crowd with a salsa version of Jerome Kern's "Yesterdays." There were excellent solos along the way, especially by Sanchez on congas and Ron Blake on trumpet. Later, in a Poncho Sanchez Unplugged program in the Ocean Bar, the band took a more subtle approach, proving again that loud is not necessarily better.

Keb' Mo's artistry was heard in all aspects of the blues. First appearing with Miller's amplified band, he shouted them out. However, he was most successful later in the week in the Queen's Lounge in a solo set with just his acoustic and steel guitar, entrancing the audience with such as the plaintive "Lula." His roots lie with artists such as Muddy Waters and Taj Mahal, and, in his selection of mostly originals, he proved he was keeping the faith.

ADVERTISEMENT
Roy Hargrove and his quartet began in high gear, with the leader playing flugelhorn on the standard "Too Soon." From there it was up hill to the finale, an unannounced original in which Hargrove opened up even further and, with a toreador's flourish, hailed the crowd with a ceremonial trumpet call to the bull ring. A stunning finish, capping what some said was one of the best sets ever.

Herbie Hancock showed both his funky and mainstream side in his varied and satisfying performance. With Miller's 10-piece band backing him, he alternated between piano and keyboards. Standing out was a new, extended take on the leader's famous "Watermelon Man." Also very effective was a haunting version of his "Maiden Voyage." A couple of unannounced numbers hearkened back to the '80s Miles Davis' groups, in which both Hancock and Miller got their start. Hancock on piano was outstanding; his keyboard work, likewise, with surprising harmonica and vocal effects.

Marcus Miller's final-night set was definitely a highlight, an effective climax to the cruise. It seemed here that his great talent is to fuse jazz with other musical categories. Opening with his "Blast From Istanbul," he transformed the electric bass into a Middle-Eastern instrument; in another number, he put a beat to Beethoven's "Moonlight Sonata"—and it really swung. As he took up the bass clarinet, he finished with an amazing medley. "Amazing Grace" slipped into Ellington's "In My Solitude," and emerged as "When You Wish Upon A Star." Fittingly, the band's encore, the Beatles' "Come Together," aptly described what Miller had just accomplished with the music.

ALL THAT JAZZ—FANS, JAMS AND THE REST

In the tiny Ocean Lounge, up close, pianist Rosnes got to fully show off her great talent. Playing with potent backup, bassist Coolman and drummer Nussbaum, she expressed unique vision and improvisational skills with her adept handling of Monk's dissonant "Green Chimney;" her stark simplicity on "Happy Days Are Here Again" and her impressionistic vison in Rodgers and Hart's "Spring Is Here."

As well, in the Queen's Lounge, vocalist Roberta Gambarini's impeccable taste and swinging sensibility were apparent in a collection of standards. After recounting the opera "Madame Butterfly," she gave a heart-rending version of "Poor Butterfly." Exhibiting her eclectic range, she went into a smashing interpretation of Patsy Cline's country classic "Crazy." Her pianist on the cruise, Orrin Evans, deserves praise, his accompaniment was nothing short of marvelous despite no rehearsal. He filled in just the right places, adding flourishes to underline lyrics, always playing creative solos. This adaptability demonstrates how musicians familiar with jazz standards and the Great American Songbook speak a common language—just give a downbeat, and they're off. (By the way Evans was stellar in his own earlier trio set.)

Many looked forward to the jams after hours around the Lido Pool, where were always surprises. A leader was slated for each night, but no one knew who else would show. On Miller and Friends night several fans got so carried away they jumped into the pool with their clothes on. Another night, there was a Pa-JAM-A Party hosted by the New Birth Brass Band, a Mardi Gras on the sea.

A big plus for these cruises is that fans get a chance to socialize with musicians. They see them in halls and elevators, everywhere. In the Lido Dining Room. For example, after Miller's very articulate discussion explaining the solos on Miles Davis' famous 1959 Kind of Blue album, I ran into him in the Lido, where we discussed the somewhat esoteric point about the importance in a solo of the pause and the note not played. And while having a drink around the pool, I talked with New Birth Jazz Band's trumpeter Kenneth Terry about the experiences members of his New Orleans-based band have had while also playing with the legendary Preservation Hall Band. Where else would a fan have these opportunities?

CRUISING ON THE WESTERDAM

My wife and I have taken a lot of cruises over the years, in fact three jazz cruises. Holland America is one of our favorite lines, and we were happy to be on the Westerdam. This spacious ship was christened in 2004, and is one of the line's largest with a capacity of 1,848. Nearly half the cabins have balconies. The ship decor is exceptional—from the colorful glass floral bouquet that fills the ceiling of the Vista Dining Room to the glass ship sculpture that dominates the Atrium, a revolving piece that catches the eye from each level of the vessel.

The Jazz Cruises organization charters the entire ship. Thus, all facilities are available for jazz events, certainly a big advantage for a cruise such as this. This is the eighth year since the company's inception, and Executive Director Michael Lazaroff points out that this is his group's 24th such cruise. In the next 12 months two Jazz Cruises are scheduled—the ninth annual "straight ahead" event, November 8-15, and the Smooth Jazz Cruise, January 17-24, 2010. When asked if there will be another Playboy Jazz Cruise, Lazaroff says, "We will hold the next one in 2010... it is hard to get this high-level of talent...every year. So we're planning for one every other year."

During the voyage, our ship was at sea three days and in port four. When off-board, there was a wide variety of excursions offered. Many went off on their own or stayed on and kicked back. onboard.

First stop was San Juan Puerto Rico. We chose to go on a walking tour, shopping and browsing in the old city. (We spotted a van full of Miller's young band members on their way to explore San Juan's famous San Cristobal Fortress.)

Our stops at St. Barts and Nevis were perfect for beach-goers and island explorers. We're snorkelers so we took local catamaran cruises. On the last day, the ship stopped at idyllic Half Moon Cay, its own private island, where we had a barbecue.

Back from the beach, we slid into the Lido Deck Jacuzzi as a farewell concert by the New Birth Jazz Band was in progress. There we were, floating in the water while the band was playing an up-tempo "A Closer Walk With Thee." Ah—the jazz life on the Caribbean. 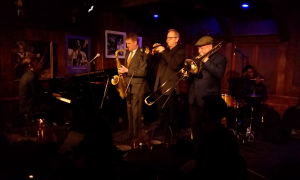