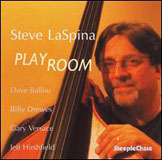 Juggling a whirlwind schedule as a musician, father and student means that bassist Steve LaSpina is always in constant motion. Play Room is a selection of original compositions that comment on the recent state of affairs in his life. The music is lively, contemplative, playful and always involving.

The title cut serves as the album's mission statement, placing avant-garde sensibilities within a bop framework. Dave Ballou and Billy Drewes banter mischievously on trumpet and soprano sax, and Gary Versace barks on the Hammond B-3. The shifting time signatures contribute to the overall feeling of spontaneity.

"Do The Math is a more conventional mid-tempo tune, with LaSpina's pizzicato and Versace's excellent piano complementing each other. The three-part suite ("It's Just Crazy -"It Never Ends -"That Explains It ) begins slowly, with LaSpina's dolorous plucking and measured playing by Drewes and Ballou. The suite gathers steam, then opens the valves to the most straight-ahead playing on the album, highlighted by Drewes' gritty tenor sax.

The album pauses for breath with "Melissa, a heartfelt duet by LaSpina and Versace, dominated by LaSpina's robust pizzicato. Then it's back on the treadmill with "On The Run, where Drewes' fluttering soprano works with Ballou's Harmon-muted trumpet. "Ashcroft Avenue continues the dynamism between Drewes and Ballou (on flugelhorn here), with some splendid piano from Versace. LaSpina's arco on "Just Because sounds like a man explaining why he's down on his luck, with Versace's initially nuanced and eventually spiraling organ serving as a sympathetic audience. And that's the trademark of Play Room: throughout the album the musicians don't seem to be playing their instruments as much as having a series of organized, spirited conversations.

Play Room; Do the Math; Suite: it's Just Crazy--it Never Ends--That Explains It; Melissa; On the Run; Ashcroft Avenue; Just Because.