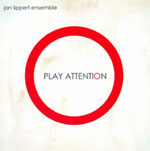 Six years ago, Jan Lippert released an album on the small Storyville label entitled Imprints. It was only his second disc as leader, but he managed to attract the interest and assistance of Michael Brecker—no mean feat for a jazz guitarist little known outside his native Denmark.

Play Attention, Lippert's third release, has been a long time in coming; and instead of looking abroad for performers with Brecker's kind of international stature, he's assembled a modest all-Danish ensemble: Kristor Brødsgaard on bass, Rasmus Kjærsgaard on saxophone, and Anders Hentze on drums. Flemming Nilsson, who performed on Imprints, briefly guests on percussion, along with pianist Kasper Villaume and accordionist Anders Vesterdahl.

Lippert has often been described as a crossover musician, though it's not entirely clear where he's crossing to or from. That tag probably has more to do with the fact that a disc like this one sits comfortably in two categories, mainstream and modern, without giving over to the stereotypical excesses of either. Play Attention certainly bears the hallmarks of mainstream jazz—well-defined and easily hummable melodies, such as the soft step up/step down of "Momentum," the bossa nova sway of "Aroma Nova," and the heavy-lidded languor of "Divaville"—but it also maintains a fairly relaxed and catholic attitude about approaching different genres.

On "In a Sense," Lippert brings what begins as a dainty smooth jazz number into psychedelic territory during his solo. Ably supported by Brødsgaard, he works up to a saucy little groove and finally lets Kjærsgaard wail in the upper register before quieting down again. "Nightcaps" later introduces some hard-edged funk to the mix, and later still "Divaville" moves in the opposite direction, wholly relying on Vestedahl's drowsy accordion to establish the tune and mood of the song. Kjærsgaard sits this one out, and Lippert never tries to be more acrobatic than the song will allow. Quite unlike anything else on Play Attention, it comes very close to sounding like the evocative cinematic music of Daniel Mille.

Collectively the ensemble is generally strong. When soloing Lippert has a few identifiable crutches, or stopgaps, one of these being the same musical phrase repeated four or five times at varying tempos or ascending increments. This appears regularly in his solos and it seems to be not so much an idiosyncrasy but a way of buying time, like the standup comic who tells the old reliable gag about the nun and the rooster while he racks his brain for more material.

Very little on Play Attention, despite the punning implications of its title, is either so bold or so beautiful as to demand the listener's attention. This makes for a polite (and at 46 minutes, perfectly timed) affair—so polite, though, that it runs the risk of forfeiting any means of distinction.