By JOHN KELMAN
December 6, 2007
Sign in to view read count 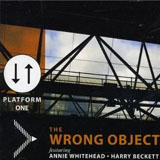 Belgium's The Wrong Object is on a roll. An album as strong as The Unbelievable Truth (MoonJune, 2007), documenting a first (and, sadly, only) encounter in 2005 with the late British saxophone legend Elton Dean, would be more than enough for any group in any year. But with Platform One, this intrepid art/rock group teams with another legend—trumpeter Harry Beckett, born in Barbados but a fixture on the British scene since the 1950s—and trombonist Annie Whitehead, who may not be a legend yet, but deserves to be. Recorded live, Platform One isn't necessarily better than The Unbelievable Truth, but it is more powerful, brimming with reckless abandon and rock energy.

The term reckless abandon makes a lot of sense for The Wrong Object. The group's reputation was first established paying tribute to the music and, more importantly, spirit of the late Frank Zappa. Platform One features two Zappa covers—the complex, twisting and turning and ultimately swinging "Big Swifty, from Waka/Jawaka (Ryko, 1972), and the slower but no less visceral "Filthy Habits, from Sleep Dirt Ryko, 1979). The former features a lithe and unpredictable solo from Whitehead, while guitarist Michel DelVille's unfettered solo on the latter approaches Zappa's solo of complete abandon on "Zombie Woof, from Overnight Sensation (Rkyo, 1973).

The rest of the album features equally strong material by Whitehead and Beckett. Whitehead's title track, a 5/4 minor blues, is introduced by a probing a capella trombone solo that is reason alone for Whitehead to garner greater international acclaim, while "This Affects That swings hard, but is kept sonically off-kilter by DelVille's guitar synth. It's a testimony to the flexibility of the group and its guests that Beckett's fiery and open-ended "Scarlet Mine, from 1970's Flare Up, sounds absolutely contemporary thirty-five years later. Beckett's elegant flugelhorn work is featured on "Tinseltown, an elegant jazz waltz carried by The Wrong Object's flexible support.

That Platform One sounds like a group that's played together longer is even more remarkable for the fact that the group and its guests never met prior to hitting the stage. Instead, they passed mp3 files back and forth before meeting, so each could learn the other's material. It may be a new way of dealing with the prohibitive costs of bringing geographically distanced artists together, but based on the many wondrous sounds of surprise on Platform One it's one that, in the hands of capable musicians, clearly works just fine.