By NICK CATALANO
April 24, 2010
Sign in to view read count
John Pizzarelli unveiled the contents of his new Telarc CD John Pizzarelli Rockin' In Rhythm: A Tribute to Duke Ellington at Birdland recently and the result was a musical explosion. It is easy to become bored with the plethora of "tribute" CDs issued almost every week these days, but this effort is truly something special.

From the moment Pizzarelli ascended the bandstand with his "Swing Seven" cohorts the room began rocking. Not only were patrons finger popping and foot stomping along with the usual Pizzarelli rhythmic intensity but they were laughing at the humorous "insider" patter, awed by some truly innovative Don Sebesky arrangements, and titillated by guitar duets from father & son Bucky and John. The Birdland stage has rarely swung so mightily. 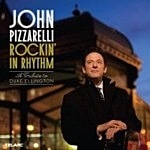 Pizzarelli records prolifically, constantly exploring catalogues for material which he can adapt to his myriad musical identities. The present outing is daring (how many Ellington retrospectives can one stand?) but achieves remarkable freshness. The matching of "East St. Louis Toodle-Oo" with "Don't Get Around Much Anymore" and resetting the music in a minor mode with a reconstructed time signature is truly inspired. The new lyrics to "Perdido" (by Jessica Molaskey) hype up an already energized vocal duet from Pizzarelli and guest Kurt Elling. Delightful stride improvisations from piano wizard Larry Fuller punctuate the clever pairing of Ellington standards "Cottontail" with "Rockin' In Rhythm." And the addition of improvising violinist Aaron Weinstein to the group supplies an authentic additive.

Throughout, Pizzarelli's uncanny articulation and adroit phrasing make his vocalizing continually compelling. His familiar scatting over fingered improvs has never sounded so crisp.

The musicians in "Swing Seven" play with an energy reminiscent of players in the 30's who were feeling the initial rhythmic tensions of swing as developed by the likes of Fletcher Henderson and Benny Moten. Drummer Tony Tedesco along with Fuller and bassist Martin Pizzarelli uniquely anchor the tempo for the hornmen—Andy Fusco, Kenny Berger, John Mosca and Tony Kadleck.

The Ellington music is interpreted and arranged with an aplomb not heard in these parts for a long time. Kudos also to the engineers at NOLA studios—Pizzarelli's recording home for many years—who did their usual brilliant mixing and mastering.