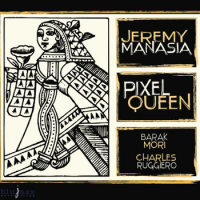 Pixel Queen is the third record to document the musical relationship that pianist Jeremy Manasia has with bassist Barak Mori and drummer Charles Ruggiero. Manasia's debut leader date—Witchery (Cellar Live, 2007)—featured a different rhythm crew, but this bass-and-drums team came aboard for After Dark (Posi-Tone, 2009), a pleasing trio-with-guests outing, and stayed for Green Dream (Cellar Live, 2012), an all-originals trio date. On this release, Manasia's fourth overall and first on the Blujazz imprint, this trio tackles six of the pianist's originals and delivers one standard—a swinging, happy-go-lucky take on Leonard Bernstein's "Lucky To Be Me."

Manasia and company come across as centrists here, delivering material that's neither conservative nor bold. It doesn't appear that anybody in this group is looking to redefine the piano trio format or break new ground; these men simply enjoy playing music together, furthering their connection through that process.

Manasia sets the album afloat, delivering a classically-inspired piano introduction that gives way to a waltzing vehicle ("Postscript From An Argument"). The follow-up tune—"Another Ordinary Day"—proves to be one of the stand out tracks on the album. A reflective piano introduces this lyrical ballad, which is transformed, deftly and subtly, into a light-and-bluesy swinger; this transition is so artfully executed that the ears barely notice it taking place.

Ruggiero's straight eighth groove bookends "Pixel Queen," as if to serve as a reminder that it's powering the piece, and a sense of comfort and serenity are carried through the aforementioned "Lucky To Be Me." The penultimate track—"One Summer's Cradle"—proves to be another album highlight. This bright-eyed, Brazilian-inflected number gives Mori some space to shine, and it focuses in on the rhythmic weave of the group. "Night Demon" and the album-ending "Lily's Hamlet" aren't quite as memorable as the rest of the material, but the group comes across as focused and energetic on both. These traits, in fact, define much of this work.

Postscript From An Argument; Another Ordinary Day; Night Demon; Pixel Queen; Lucky To Be Me; One Summer's Cradle; Lily's Hamlet.