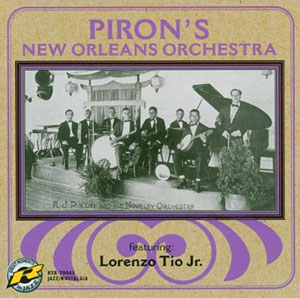 Listeners accustomed to the wail and stomp of early New Orleans jazz might be surprised to hear the whisper and glide of Piron's New Orleans Orchestra. While famed pioneers such as Louis Armstrong, Sidney Bechet, and Johnny Dodds spoke from the earthy tradition of the outdoor parade, Piron's orchestra illustrated the smooth sounds of indoor entertainment. Not that Piron's band couldn't turn up the heat when it wanted; it was just a slow burn rather than a sudden bonfire.

A tune like "Do Doodle Oom" sashays in at an easygoing bounce, with Piron's band gradually pushing the backbeat. The strutting second strain then leads into an elegantly hot stop-time chorus for Peter Bocage's trumpet. The ride-out opens things wide up, but the groove is steady and no single voice dominates. It's a reminder of jazz's early dalliance with pop music: something not intended to impress audiences at a concert, but to invite them onto a dance floor.

Leader and violinist Armand Piron understood many sides of getting audiences to listen. His publishing company (co-owned by fellow hometown musician and impresario Clarence Williams) published jazz hits including "Royal Garden Blues" and Piron's own "I Wish I Could Shimmy Like My Sister Kate." After working in vaudeville, and playing with the likes of Bechet, Joe Oliver and Oscar 'Papa' Celestin, Piron started his New Orleans Orchestra. They performed at the storied Roseland Ballroom in New York before returning to New Orleans for a steady stream of work in country clubs and nightclubs.

Piron's group was primarily an indoor dance band, meaning volume and flights of solo fancy took a backseat to melody and a steady beat. Yet, clear tone, gentle grooves and colorful wit saturate both arranged passages and freewheeling collective improvisations. Even without the extroverted flourishes of Oliver and Jelly Roll Morton, Piron's New Orleans Orchestra maintains the light rhythm and airy textures associated with Crescent City jazz. The featherweight processional of "New Orleans Wiggle," and behind-the-beat drive of "Louisiana Swing," no doubt impressed East Coast bandleaders like Fletcher Henderson and Duke Ellington, who, at that time, clung to a jerkier rhythmic feel.

Well before jazz was a soloist's art—or, for many, an art, period, it was a rhythmic rallying point for the community. Even if the dancers at Tranchina's Restaurant weren't listening closely, they had to have heard and felt this band's spirit.