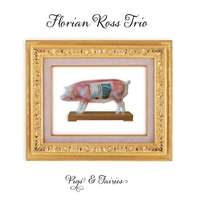 As a composer, German-born pianist Florian Ross seldom strays from the musical basics: melody, harmony, rhythm. As a performer, however, he uses those same basics to fashion a broad palette of sound, coming at the listener from a variety of routes and angles cannily designed to deepen an over-all mood of singularity and anticipation.

On Pigs & Fairies, his fourteenth recording since 1998 and third as leader of his trio, Ross uses every weapon at his disposal, from a conventional piano (not heard until Track 3) to electric piano, FM synthesizer and EFX (whatever that may be) to keep his listeners engaged and assure their undivided attention. While his random digressions into electronics may not suit everyone's taste, there is no doubt that they serve as a provocative counterpoint to such more straight-ahead fare as, say, "Spinning Kenny," "No Pun Intended" or "Miasma," the last of which is one of two selections featuring guest tenor saxophonist Paul Heller (the other is the aptly named "Calm").

Ross plays acoustic piano on "Calm," "Spinning Kenny," "No Pun Intended" and "Miasma," various electronic devices the rest of the way. Is he overdoing it? That's up to the listener to decide. Needless to say, he is proficient on every one of them, and the synthesizer, electric piano and EFX are credible in his hands. As for bassist Dietmar Fuhr and drummer Fabian Arends, they are exemplary in a supporting role, keeping the pulse steady and the rhythm moving forward no matter where Ross chooses to lead them.

As Ross wrote all of the album's eleven selections, its success rests in some measure on his artistry in that realm, which is for the most part above par. Pigs & Fairies should gladden those who lean toward fresh and unconventional precepts, especially when it comes to jazz piano trios.