By DAN MCCLENAGHAN
September 4, 2009
Sign in to view read count 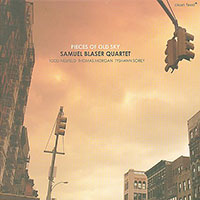 Pieces of Old Sky could be called furtive jazz. The quartet—trombone, bass, guitar and drums—sneaks around the perimeter of the room, leaving big swaths of space. It sounds as if there are mysteries in this music, secrets in Samuel Blaser's sonic world.

Swiss-born trombonist Blaser treads a free jazz territory that is similar in sound and scope to Henry Threadgill's, with drifting, amorphous melodies, telepathic group interplay and unwavering conviction. The ensemble prowls in stealthy, communal fashion on the opening 17-minute title tune, walking a cerebral/visceral tightrope with a provocative élan.

"Red Hook" cranks up the pace with, again, space playing a major part in the churning atmospherics, full of restlessness and individual virtuosities melding into a cohesive whole as Blaser blows boldly inside the ensemble sound. "Choral I" gets into a loose, pensive groove, with Blaser displaying a beautiful round, warm tone, while "Mystical Circle" is imbued with a forlorn gorgeousness, as guitarist Todd Neufeld's ringing tone injects some luminescent mythology into the sound.

A young jazz artist—he was born in 1981—Blaser doesn't make the young player's mistake of trying to show off everything he can do on one CD. Pieces of Old Sky has the feeling an enriching depth due, in part, to its start-to-finish cohesion of one slice of Blaser's musical vision, with its consistently spectral mood, and the feeling that there are jazz ancestor spirits lurking in the spaces between the notes.

Pieces of Old Sky is a fine and riveting set, with Blaser's rising star shining brightly.