Chris Byars: Pictures at an Exhibition of Himalayan Art

By ELLIOTT SIMON
April 2, 2008
Sign in to view read count 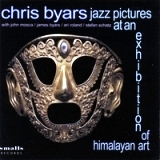 While its mission is the preservation of Himalayan art, NYC's Rubin Museum continues to produce an excellent concert series in collaboration with the National Jazz Museum in Harlem. The series has developed into a forum for artists to perform new projects in a singularly spiritual setting. Saxophonist Chris Byars has in effect written a soundtrack for selected art pieces from the Rubin—ancient tapestries depicting the deities and concepts of the Bön religious tradition of Tibet—reproductions of which are included in the album's inner sleeve, enabling listeners to enjoy a cross-media meditative experience.

The music is quite open and works well with the broad musical voicings that are an integral part of this quintet. In addition to Byars' saxophones and flute his father, James Byars, adds a chamber-like second voice on oboe and English horn while trombonist John Mosca displays impressive bop sensibilities. Bassist Ari Roland and drummer Stefan Schatz' rhythms provide an Eastern tinge.

The leader represents both the "Tönpa Shenrab," founder of Bön, and the "Buddha Shakyamuni" as the essence of cool and revels with Roland in the bodhisattva of the blues with "Blues Under the Boddhi Tree." He reveals that the realization of nirvana or "Arhat" is exuberant bop while the cries of the wrathful deity "Chakrasamvara" are represented by both Chris' engaging flute and a combination of dark instrumental drones.

An acoustically sweet environment and a space that is appointed with cherry wood make the downstairs room at the Rubin one of the best places in the city for live jazz. Now, the museum's tapestries and artifacts have returned the favor, serving as wonderful inspiration for this aptly-titled album.

The Better To See You; T